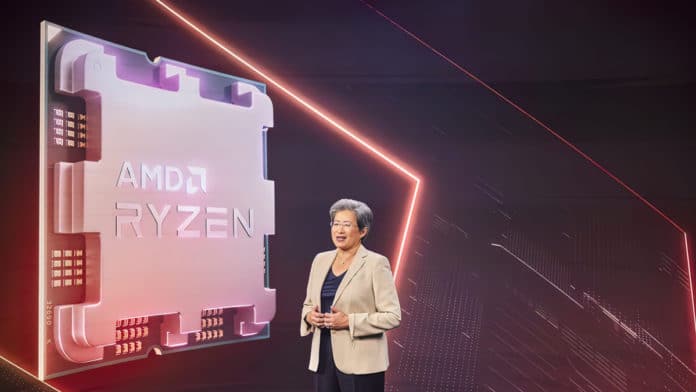 AMD on Monday announced the launch of its Ryzen 7000 Series desktop processors based on the upcoming “Zen 4” CPU architecture during the company’s Computex 2022 keynote address in Taiwan.

Based on TSMC’s 5nm process technology, the new Ryzen 7000 Series desktop processor is projected to provide a greater than 15% uplift in single-thread performance as compared to its predecessor, for a better desktop PC experience.

The new desktop processors will feature up to 2x chiplets or CCDs (Core Complex Dies). Each 5nm chiplet will have up to eight cores and the L2 cache has also doubled to 1MB per CPU core.

During the keynote, AMD also teased a pre-production 16-core, 32-thread Ryzen 7000 Series desktop processor that ran at 5.5 GHz clock speed throughout AAA gameplay, which is a first for the company.

More details about the AMD Ryzen 7000 series desktop processors are expected to be revealed in the coming weeks.

The new desktop processors with Zen 4 cores will officially be coming in Fall 2022, which could be somewhere between September and December 2022.

Besides the AMD Ryzen 7000 series, the company also announced the new AMD AM5 line of motherboards to support the new processors.

It will come with a 1718-pin LGA socket, support for up to 170W TDP processors, dual-channel DDR5 memory, and new SVI3 power infrastructure.

The AMD Socket AM5 platform features the most PCIe 5.0 lanes in the industry with up to 24 lanes split across storage and graphics.

It will feature three levels of motherboards, X670E (Extreme), X670, and B650. These motherboards will be available via OEMs such as Asus, Gigabyte, MSI, Biostar, and Asrock.

Other than these, AMD announced the newest addition to the Ryzen Mobile line-up, “Mendocino” processors based on a 6nm process.

These new chips will feature four 6nm Zen 2 cores and RDNA 2 architecture-based graphics for the best battery life and performance. The new processors will be available from OEM partners in Q4 2022.