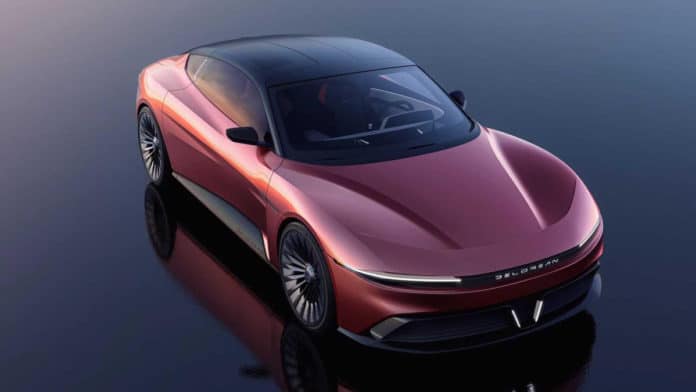 Early access subscribers were given the opportunity to preview the vehicle 24 hours before its official launch on May 31.

For the unversed, the original DeLorean is famously remembered for producing the DMC DeLorean (DMC-12) stainless steel sports car that featured as the time machine in the Back to the Future film trilogy (1985, 1989, and 1990).

However, the company was shut down when it went bankrupt in 1982.

This current DeLorean Motor Company, located in Humble near Houston, Texas, is not and has never been, associated with the original company. The new brand is being led by Chief Executive Joost de Vries, who formerly worked at Karma and Tesla.

Designed by ItalDesign’s Giorgetto Giugiaro, who designed the original DeLorean, the vehicle will feature two large electronically powered gullwing doors that each expose the first and second row of seating.

Further, DeLorean’s new Alpha5 electric vehicle is a four-seater with a 100+kWh battery powering dual motors and will have an estimated range of more than 300 miles (483 km).

The Alpha5 has two separate displays inside, one behind the wheel for the driver and the other one on the center console for the passenger.

“The Alpha5 is a representation of the past 40 years of DeLorean. There was this enormous responsibility to make sure we honored the history of the DeLorean brand, but an even greater responsibility in curating its future…I think we did both with the Alpha5,” said Troy Beetz, Chief Marketing Officer of DMC.

“We have been given the opportunity to re-imagine a brand that has meant so much to so many people from all corners of the globe, for 4 decades. DeLorean has touched so many lives and set the stage for so many memories….we all are now witnessing a new chapter of this amazing story,” added Neilo Harris, Vice President of Brand & Creative at DMC.

The upcoming Alpha5 is scheduled to make its public debut on August 18 at the Pebble Beach Concours d’Elegance car show before being put into production in 2024.