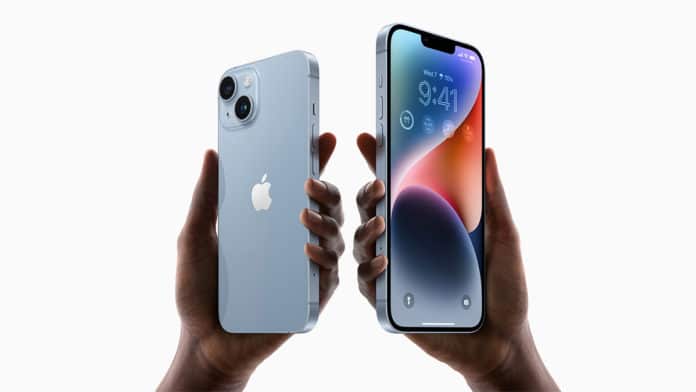 The iPhone 14 and iPhone 14 Plus includes some new features, a familiar design, impressive camera upgrades, and groundbreaking new safety capabilities.

So, here’s everything you need to know about the new iPhone 14 and the iPhone 14 Plus.

iPhone 14 And iPhone 14 Plus: Features

Both feature a durable and sleek aerospace-grade aluminum design as well as the durable Ceramic Shield front cover, which Apple says is the most durable material used on any smartphone screen.

The handsets are powered by the new version of Apple’s A15 Bionic chip that is developed on the 5nm process and also powers the iPhone 13 series. The new A15 Bionic on the iPhone 14 series comes with a 6-core CPU with 2 performance and 4 efficiency cores, 5-core GPU, and 16-core Neural Engine.

Starting at 128GB, the iPhone 14 and the iPhone 14 Plus can be configured with up to 512GB of internal storage with no option for SD card expansion. They come with 4GB of RAM.

Moving to cameras, the iPhone 14 and iPhone 14 Plus come with a 12MP dual camera setup on the back that includes a new 12MP Main camera with a larger ƒ/1.5 aperture and 1.9 µm pixels, enabling photo and video improvements in all lighting scenarios.

It also has a sensor-shift OIS, a new front-facing 12MP TrueDepth camera with an ƒ/1.9 aperture for selfies and video calls as well as a secondary 12MP Ultrawide camera with ƒ/2.4 aperture.

Both the handsets support a new Action mode for an incredibly smooth-looking video that adjusts to significant shakes, motion, and vibrations, as well as an improved True Tone flash which is 10 percent brighter.

They also support Cinematic mode, which is now available in 4K at 30 fps and 4K at 24 fps.

On the connectivity front, they support 5G, Wi-Fi, dual-SIM (nano-SIM and eSIM), Bluetooth, GPS, and a Lightning port for charging.

Further, the iPhone 14 and iPhone 14 Plus U.S. models do not include the SIM tray and support only e-SIMs. These devices run on the latest iOS 16 software out-of-the-box.

Both the models are splash, water, and dust resistant and have an IP68 (maximum depth of 6 meters up to 30 minutes) rating under IEC standard 60529. As far as the battery is concerned, Apple confirmed that the iPhone 14 and the 14 Plus can easily last one full day on a single charge.

Lastly, the entire iPhone 14 line-up comes with a high-dynamic range gyroscope and dual-core accelerometer that enable the ‘Crash Detection’ feature on iPhone on detecting a severe car crash. It automatically dials emergency services when a user is unconscious or unable to reach their iPhone.

The iPhone 14 series also comes with the Emergency SOS via Satellite (only in the U.S. and Canada for now) feature, which allows users to manually share their location over satellite with Find My when there is no cellular or Wi-Fi connection, providing a sense of security when hiking or camping off the grid.