How would you expect Nokia announcing Launch of its phone, well this time it was a simple tweet rather than a press conference or product announcement. 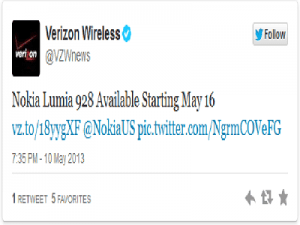 Nokia surely thinks it to be their victory and break back into the US. The company was knocked for previously striking an exclusivity deal with AT&T in exchange for a bigger promotional effort. While Nokia got more Lumia 920 commercials on the air, it also locked itself out of the largest carrier in the U.S.

The phone is lighter than the Lumia 920. and has an AMOLED display and brighter Xenon flash, giving it a few minor improvements. and yes rumors about its metallic aluminum body went wrong, and it is having the same body as Lumia 920 made of  polycarbonate(plastic).

The model features a 4.5-inch organic light-emitting diode, or OLED, display, a 8.7MP camera with a CarlZeiss lens, and a 1.5GHz Qualcomm (QCOM) dual-core processor.
Nokia added that the Lumia 928 features three high-audio-amplitude-capture microphones and one of the most advanced loudspeakers available for smartphones.

The Lumia 928 will be available to Verizon customers from May 16 at a cost of $99 after a $50 dollar mail-in rebate, Nokia said. A two-year service agreement is also required.