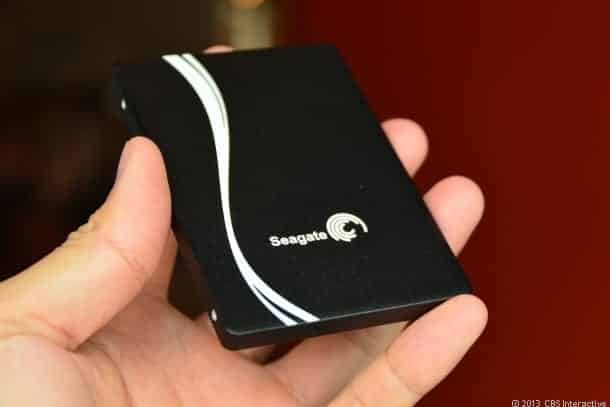 First 5mm SSD By Segate:
The Seagate 600 SSD is the first SSD on the market that’s available in both 7mm and 5mm thicknesses.

Both Two choices are available with in three capacities, 120GB, 240GB, and 480GB. The 240GB and 480GB capacities offer up to 500MBps and 400MBps in sequential reading and writing, respectively. They offer random reading and writing of up to 80K-IOPS (input/output operations per second) and 70K-IOPS, respectively. The 128GB capacity, however, has a slightly slower writing speed of 300MBps for sequential writing and up to 60K-IOPS in random writing.

The Seagate 600 SSD supports the latest SATA 3 (6Gbps) standard and comes in the popular 2.5-inch design. Seagate says the drive uses 19nm Multi-Level Cell NAND flash memory and support the latest “on-the-fly error-correction algorithms.” It also supports Native Command Queuing and Data Set Management with Trim to offer high performance and a long life span.
According to Seagate, the 600 SSD can be used exactly the same way as any Seagate 2.5-inch standard hard drive, but it should be used with Windows 7 (SP1) or Windows 8 to ensure the proper use of the Trim functionality. It’s unclear for now whether the drive is compatible with Macs.

Seagate says that the new 600 SSD consumes about the same amount of power as a regular 5,400rpm hard drive. The SSD requires about 950mA on startup and about 4W max power during operation. This is a very high power requirement compared with other SSDs. The Samsung 830 series, for example, uses just 0.24W during operation and 0.14W when idle. It’s unclear why the new SSD requires so much power, but this means it’s best suited for desktop computers where battery life is not a big concern.

Another factor that’s unclear is the pricing of the new 600 SSD. Seagate says that the drive will be “very competitively priced,” so check back soon for the full review, where we’ll put it up against other SSDs in terms of both performance and value.