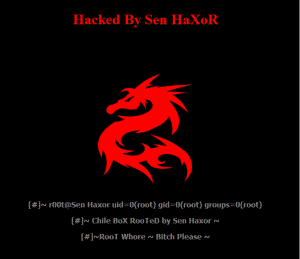 More than 2300, Websites of chile, columbia and turkey has been hacked and defaced by Hacker Sen HaXoR.

The Hacker have rooted the entire server, and causing mass defacement of more than 2300+ websites of From chile, columbia and turkey.

1500+ websites of Columbia and Turkey was hacked yesterday, the paste containing the entire list of domains hacked can be seen below:

800+ Websites of chile hacked today can be seen from the paste provided below:

Most of the websites are still defaced, and are the home page defacement. although the defaced website does not contain any message except:

Rooted by Sen HaXoR And greetings to other hackers of India And Hackers from other countries.

We tried to ask for the reason of Hacking from the hacker and got a very short answer:

just want to be best defacer

thats it.
Don’t be a silent user let us know what do you think about it in comments below 🙂