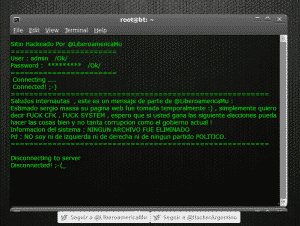 The official website of Sergio Massa (Mayor of Argentina)  was hacked and defaced by LiberoamericaMu.

The official website Sergio Massa , Mayor of Argentina (https://www.sergiomassa.org/) was hacked and left defaced today. the defacement was Announced by the hacker from his official twitter profile

The hacked website was left with a deface page stating a message in spanish:
Dear sergio massa their website was taken temporarily CFK just want to say FUCK, FUCK SYSTEM, I hope that if you win the next election to do things well and not so much corruption as the current government! System Information: ANY FILE WAS REMOVED PS: NO I am neither left nor right nor of any party POLITICO. (English translated version).

The website was still showing deface page at the time of writing the Article.