when the mail is opened in a html web browser it shows you have a New Voicemail on whatsApp, and shows a play button.
If the windows user clicks on the link, a Zipped file is saved into the system, named something as ‘Voicemail_abc_123(456).zip’. 5 days back when the malware was idscovered only 6 of 48 popular Antivirus Program were able to detect the Malware. but now it is Identified as Malware by almost every popular Antivirus program.
When the file is uncompressed it shows a musical note and seems like voice message.
If the same link is opened by a device with Android OS. Malware installs a file ‘WhatsApp.apk’, on examining which security researchers from Malcovery Today found it a malware.

The malware is detected as a variant of trojan on many Antivirus program. 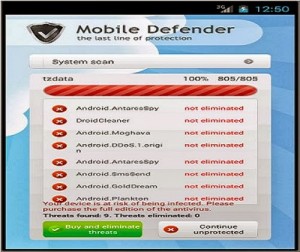 and in case if it gets installed on A Android device, it acts as a Fake Mobile Antivirus program.

First the Malware pretend to scan your Mobile phone, and shows different fake Malwares present in your mobile.

And then it asks for credit card details to buy the Software to remove harmful malwares.

In case if a victim enters credit card details, his account may get compromised and can Cause theft of money from their Account.
We will suggest our visitors, not to click any similar links in your mail, or Any social networks, and keep their Antivirus program up to date.