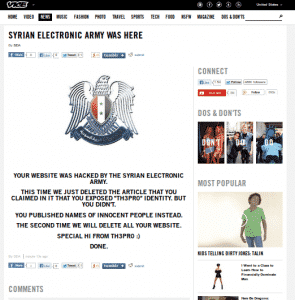 Few months back various media group published the Article about exposing the leader of the Syrian Electronic Army, SEA, said that the person which media is talking about is not from their group. and also warned the media to don’t publish news which are not proved.

SEA also says they hacked the website just 2 days after the vice published the Article claiming to leak the identity of leader of SEA, but Vice’s admin was aware of it, so they postponed the attack.

A last tweet from SEA account shows they were having access to emails of vice’s employees. they also said they were able to compromise the mailchimp account of vice and send mail to 33,000 subscribers.


At the time of writing the Article the website was restored.