In a surprising revelation the NSA whistlblower it has come out open that the the Dutch intelligence service (Algemene Inlichtingen en Veiligheidsdienst) also called as AIVD has been hacking various internet web forums to collect the data of all users.

Though the majority of these users are just ordinary forum members but most of them might be Dutch citizens.  AIVD used a technique called CNE or Computer Network Exploitation to hack these forums. 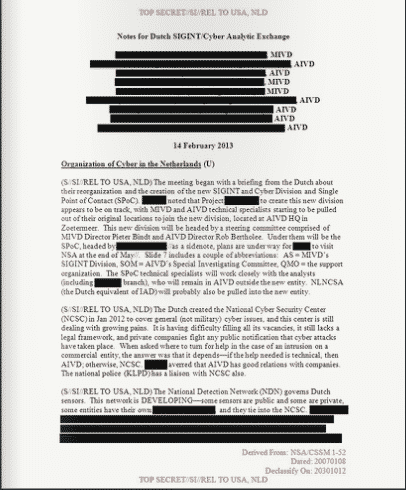 But AIVD is in deep trouble now as Dutch are know for their liberal laws and these hackings are seen as personal attack on the liberty of the Ducth and world citizens.  A Dutch Professor, Nico Van Eijk ans opined that by doing so the AIVD has crossed the bounderies of Dutch constitution “They use sweeps to collect data from all users of web forums. The use of these techniques could easily lead to mass surveillance by the government.”
Another IT specialist Matthijs Koot feels that the use of this technology by a Government authority creates a blurring line between hackers, normal citizens and intelligence services.
The document which is available here, is dated 14.2..2013 and gives a brief summary of the meeting between the officials of the NSA and the Dutch intelligence services – AIVD and MIVD.   It is during this meeting that AIVD mentioned their hacking technique, the CNE to NSA – “They acquire MySQL databases via CNE access” The document further adds that the Dutch  “are looking at marrying the forum data with other social network info, and trying to figure out good ways to mine the data that they have.”
There is already a strong opposition with the Dutch MPs calling for a parliamentary enquiry into the workings of AIVD and MIVD as the Dutch people are known votaries of the civil liberties.