TechWorm
Home Announcement
Facebook
Twitter
Pinterest
WhatsApp
Just few minutes ago at Around 2 p.m EST today, Tech Giant Google have faced a serious outage, with most of its services including Gmail, Google+ and Blogger facing the down time. 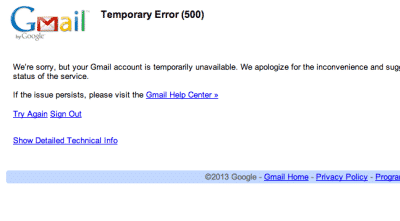 For a while people all over the world was in a big panic that was it them alone, facing the problem or it was everyone.

Yes Google’s “Blogger.com” which hosted Millions of blog was down, causing the websites facing the down time too, For a while “Techworm” was also not accessible since its hosted on blogger.

Moreover it seemed like Youtube comment system and Google hangout and Gtalk was also affected during the outage.
The issue now seems to be fixed, but Google have yet not provided any statement over the Incident.

we will be updating you as soon as Google shares their comments over the outage.