While the conversation between the Microsoft employees through emails looked like they were bit worried of the ongoing attacks, but that was not enough because these conversations which should have been private, was made Public by Syrian Electronic Army.  The SEA seemed to be able to monitor their email conversation and was one step ahead of them, it looked like Syrian Electronic Army played like Secret service Agents and spied over the mails of Microsoft’s employs who were affected in the attack.

Yesterday’s story did not end up with the Microsoft News Twitter account being hijacked, for that seemed like a trailer in view of what SEA  has planned for Microsoft.  Just after 3 hours of attack over the Microsoft news twitter account, they hacked into Official Microsoft blog

To make the matters worse, it was not only that SEA tweeted it, but it was confirmed by several other peoples too, that the blog was redirecting to SEA’s website.

While the hack was being carried out, SEA also continuously monitored email conversations between the Microsoft staff

Two of the tweets from SEA one after another shows the email conversation between the staffs,

While the Microsoft blog was hacked and with few Articles being posted by SEA, the hack also effected the Microsoft official website, The news section on the website which is designed to show the news feeds from Blog page, was showing feeds of the Article written by SEA. 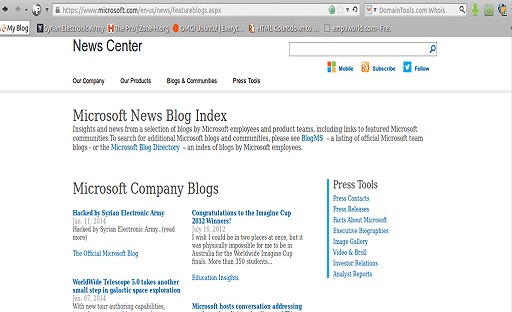 Screenshot showing how Official Microsoft website looked like after the attack
The series of hack carried by SEA, arise many questions on how the Attack were being carried out, with some of the experts believing it to be a phishing attack, with few other believing major private exploits used by SEA for such attacks.
But it looks like The Security team is left with no choices when they are hacked. Since it looks like Microsoft team is not taking the security seriously, it is possible that they may suffer another breach in coming days.
For more details over the hack, we have already contacted SEA team, we will update you as soon as we get a response.