TechWorm
Home Announcement
Facebook
Twitter
Pinterest
WhatsApp
BITCOIN is living dangerously ever since China decided to ban Bitcoin exchanges.  The announcement by the Chinese government was enough to spook the Bitcoin exchange with dropped from a 52 week high of $1200 at the beginning of December to a low of  $730 at the end.   Now a report published by the US Congressional Research Service may do it more harm.

The Bitcoin recovered from that news in the first few days of 2014 and was trading in the range of  $1000 at Mt.Gox the largest Bitcoin exchange online. But now the Bitcoin’s future looks a little bleak in the light of US Congressional Report.  The report which was released very quitely last month has literally damned the Bitcoin.   The Report which is available here says that the Bitcoin is detrimental to United States Monetary Policy and a threat to the entire US economy.  It has also stated that US needs to control the trade of Bitcoins in US through tighter fiscal control. 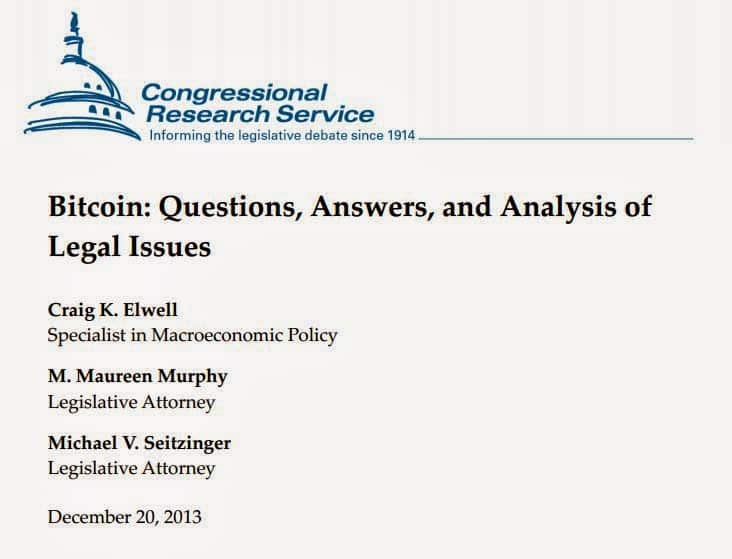 The Congresssional Report is published by the Congressional Research Service and is tasked with producing research papers fo for US policy makers especially the Feds.   The report is very vocal of the threats from Bitcoin to the United States Dollar ($) and overall stability of the US economy.

“If greater use of bitcoin (and other cryptocurrencies) leads to multiple monetary units, these benefits could be threatened, particularly if these new currencies continue to exhibit a high degree of price volatility”

The researchers insist that the Bitcoin usage in the United States has grown by leaps and bounds and too much Bitcoin usage would lead to a situation where the US monetary policy will have to be reigned in due to increase in money supply of US dollars.

The researchers have also given a kind of hypothetical situation in which the Bitcoin would cause excessive supply of USD into the US economy.  They say this would depend on a couple of factors like the Bitcoin has to be used very widely by the US citizens to have any cascading effect.  Second premise is that Bitcoins must be used as a currency in its own right.

The researchers may be right about their premise but as of now the Bitcoins are used as a kind of stock money.  Most people using Bitcoins actually dont use it for any kind of transactions like buying and selling of goods.  Most Bitcoin owners are hoarders or speculators of some sort with only few online portals accepting Bitcoins as legal currency. Another argument is that the overall Bitcoin market it very volatile and illiquid to make any dent into the US economy.  The trading that goes on is based on speculation rather then market forces.

But if and when more and more stores, both online and the brick and mortar ones, start accepting Bitcoins as a legal tender and Bitcoins are readily substituted for dollars across US on a long term basis, the illiquid and volatile nature of Bitcoins would change. People  wont hoard the Bitcoins and free movement of Bitcoins may create a parallel legal tender within the United States creating a huge excess supply of United States Dollars due to reduction in demand for it.  And this is the situation that the authors of this report warn about.  The danger, as per the researchers is that this reduction in the demand for dollars would then adversely affect the rate of circulation.  Once this happens, the United States Federal Reserve will have little say over the economy.  Right now the Fed controls the US monetary policy through a mix of fiscal policy measures.  This measures include tightening the availability of the US dollars to the US citizens as per the monetary policy.

“In this case, for the Fed to maintain the same degree of monetary accommodation, it would need to undertake a compensating tightening of monetary policy.  At a minimum, a substantial use of bitcoins could make the measurement of velocity more uncertain, and judging the appropriate stance of monetary policy uncertain.”

Right now the Bitcoin usage is in a nascent stage and any policy measures against the Bitcoin would have a crippling affect not only on the Mt.Gox but also to the many users who have actually saved Bitcoins for a rainy day.  The world citizens which saw the crash of US and world markets post 2008 crisis and crash in value of gold in 2013 would have though to have found a safe haven in Bitcoins. Any policy move by the Fed would render their saving to be wiped out within months.

The move by the Fed is closely watched by all Bitcoin aficionados as well as Bitcoin baiters.  Techworm will be keeping you abreast with all the information from the world of Bitcoin, fiscal or otherwise to safeguard you holdings.