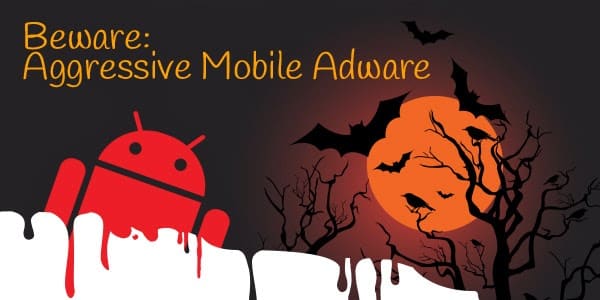 Google’s crackdown on malicious ‘adware’ within Android apps last September had an immediate impact on the number of people encountering this category of mobile Malware, according to security firm Lookout.
Google has published its latest figures for “encounter rates” with various categories of mobile Malware in 2013; they have noticed sharp growth in Adware rates between the second and third quarters of the year, but then a decline in many countries in the final quarter.
Google has updated its Play Store terms and condition In September 2013 According to Google’s updated Play Store terms and conditions around 36,000 apps contained Ad network which broke the rule, as explained by LookOut in a Blog Post.
LookOut Further Explains that “Through Q3 2013 Adware began to fall. By late 2013 the biggest offenders, Lead Bolt, and RevMob updated their advertising SDKs to be compliant with the new guidelines providing a much less intrusive experience to users.”
The LookOut report further warns that the Adware is still frequently encountered by mobile users, with SDKs bundled into apps that steal personal data and insert “occasionally disruptive, often offensives adverts” into the user experience. It also states that the Adware encounters mostly in Smartphone users.
LookOut claims that “In this world where our personal phones are used in the corporate workplace, gaining unprecedented access to valuable information, it is even more important than ever before that we police advertising networks, Ensuring that they, and the apps that carry them, are built from the ground up with privacy and security in mind is the only way we will prevent criminals from adapting to this latest opportunity.”
Lookout’s new report also notes that there is a rise of another mobile Malware category, “chargeware”. These “Chargeware” Apps refers to apps – which often focused on pornographic content – that are deliberately unclear about how they charge users, and how those people can unsubscribe.