TechWorm
Home Anonymous
Facebook
Twitter
Pinterest
WhatsApp
Internet hackctivists Anonymous yesterday announced a campaign #OpJustina against the State of Massachusetts, Judge Joseph H. Johnston and Dr.Alice W.Newton for their part in keeping Justina away from her parents.   They have already published the address and phone numbers of the Judge and the doctor and the hospital online and warned of further attacks against the authorities who they claim are illegally detaining her and keeping her away from her parents. 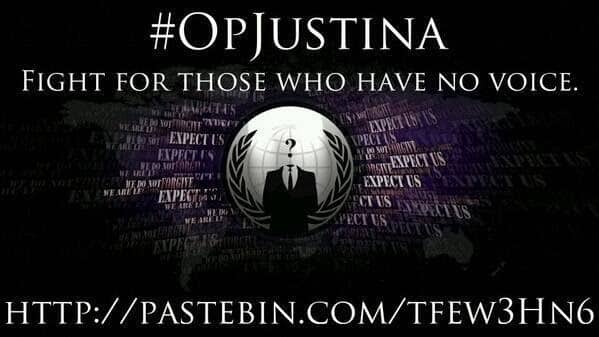 As per The Blaze, an American newspaper, Judge Johnston again delayed the ruling in the case leading to further state protection for Justina.  Now the ruling will come only on next Friday.  The problem arose 13 months ago.   Justina was diagnosed several years ago with mitochondrial disease by a doctor at Tufts Medical Center. She was being treated for this disease.  Boston Childrens Hospital however put up a different line of medication for Justina.  In early 2013,  when Justina suffered from Flu, the Boston Childrens Hospital disagreed with Justina’s parents Lou and Linda Pelletier and said that she suffers from somatoform disorder.  Justina’s parents disagreed with this line of treatment and said that they were taking Justina back to Tufts.
BCH however made contra allegations against Justina’s parents of  medical child abuse and filed a case against them.  The Judge ruled that the BCF was right and gave Justinas custody to the Massachusetts Department of Children and Families.  The DCF thus has Justina in custody since Feb. 14, 2013 and her parents are made to run to court for every hearing instead of being with their child.  They are only allowed 20 minutes of visit time per day.
Judge Joseph Johnston had pledged during a hearing Monday to rule by the end of the week, and there was no explanation provided for the delay.  Anonymous now have taken the cudgels on behalf of Justina’s parents for her release into their custody.  Anonymous on their Pastebin allege that she “has been detained her in addition to being tortured physically and mentally by this corrupted system for nothing more than being sick.”
Resource : Boston Globe