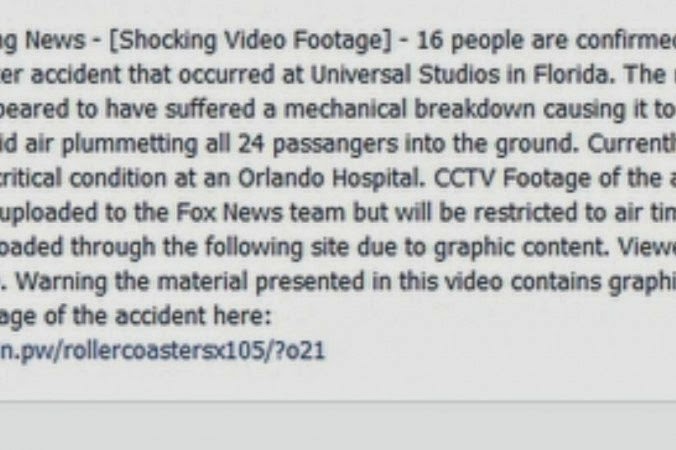 Using ghastly videos by scammers to rake in a few bucks is nothing new.  Last month when Malaysian Airlines Flight MH370 disappeared crooked scamsters used the tragic opportunity by circulating a fake video post which led viewers to a phishing website. Now scammers are using another fake tragedy in United States to rake in a few bucks through emotional blackmail.    The so called tragedy is said have happened in Universal Studios, Florida United States and 16 people are dead.
Scammers have made a post which says that “16 people are confirmed dead in a roller coaster accident that occurred at Universal Studios in Florida,” on Facebook as well email.  Due to the sensitivities concerned the FB post has become viral but readers are warned that it’s fake and is just a scam.  Once the visitor clicks on the post, it could potentially install a rogue app in your Facebook account.
More of the post says,“Fox Breaking News – [Shocking Video Footage] – 16 people are confirmed dead in a roller coaster accident that occurred at Universal Studios in Florida. The roller coaster appeared to have suffered a mechanical breakdown causing it to veer off the tracks in mid air plummeting all 24 passengers into the ground.”
However clicking on the posts shows no video but like all scamming and phishing tricks, user is  directed to a phishing website that looks like Facebook but asks users to share it before going further. This scam has many variants, some make victims download a fake or rogue Facebook App while others will access your profile history and your circles.    Like the MH370 video scam this one also sends users to a fake phishing website which looks like a genuine survey website but instead it is intended to steal your personal information.
If you have been shared with this post, kindly inform the sharing party about the scam and tell all your Facebook Friends to check whether any rogue App has been installed after liking the post. If it is visible you and your friends should remove the app from your Facebook account.