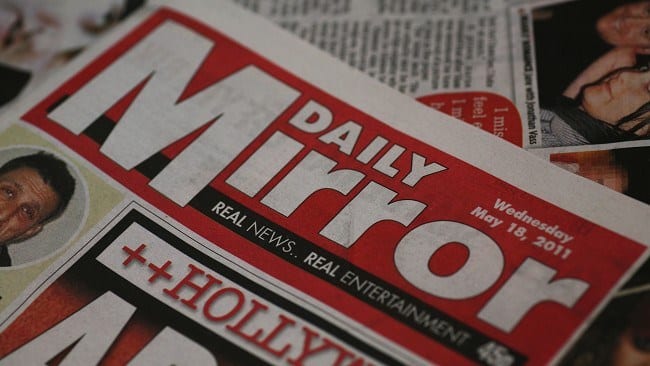 After accepting the liability over the 2003 phone hacking scandal of the News of the World fame, last week, Trinity has paid out nearly £125,000 in damages to the first six claimants.  The claimants include British actor Christopher Eccleston and former England football manager Sven-Goran Eriksson.

On 24 September 2014, Trinity Mirror had for the first time admitted that some its journalists had been involved in phone hacking scandal. It further agreed to pay compensation to entertainer Shane Richie, soap actresses Shobna Gulati and Lucy Benjamin and BBC creative director Alan Yentob. However as soon as it announced its intentions to compensate the victims of the alleged #phonehacking scandal, the number of claimants jumped to 50.

Trinity Mirror PLC is one of the largest British media conglomerates with interests in newspaper, magazine and digital publishing. It runs the largest selling newspaper Daily Mirror along with 240 other newspapers like Sunday Mirror and People, and the Scottish Sunday Mail and Daily Record. Its headquarters are at Canary Wharf in London.  It got embroiled in the #Phonehacking scandal when in 2011 there were allegations about it being in cohorts with the now defunct News of the World.

The News International phone-hacking scandal is a controversy involving the now defunct News of the World and other British newspapers published by News International, a subsidiary of the then News Corporation. The journalists employed by the NoTW were accused of engaging in phone hacking and police bribery just to get sensational news stories. The #phonehacking news created quite a scandal in United Kingdom.  After the huge public outcry, the investigations conducted from 2005 to 2007 showed that NoTW had hacked phones of celebrities, politicians and members of the British Royal Family.

In July 2011 it was revealed that the phones of murdered schoolgirl Milly Dowler, relatives of deceased British soldiers, and victims of the 7 July 2005 London bombings had also been hacked.  These revelations created further furor in United Kingdom and the matters reached House of Commons.  The immediate after affects of the 2011 revelations caused News Corporation owner Rupert Murdoch, Dow Jones chief executive Les Hinton, News International legal manager Tom Crone and chief executive Rebekah Brooks to resign.

The commissioner of London’s Metropolitan Police Service, Sir Paul Stephenson, also resigned his post. The effects of the #phonehackings caused a total advertiser boycott on the News of the World and on 10 July 2011, NoTW shut shop after operating for more than 168 years.

Though the allegations of similar type of sensation hunting escapades were also levelled on Daily Mirror journalists and management, it had somehow evaded the public outcry.  But on 22 July 2013 a former Daily Mirror financial journalist James Hipwell openly came out in the open and said that the practice of #phonehacking was “endemic” at the Mirror during his time there under the editorship of Piers Morgan.

After a year of dilly dallying with the allegations, Trinity Mirror which owns Daily Mirror came out with acceptance into the role of its journalists in the #phonehacking. It also announced that it had earlier settled six other phone hacking claims in relation to former England football manager Sven-Göran Eriksson, footballer Garry Flitcroft, actor Christopher Eccleston, showbiz agent Phil Dale, Richie’s wife Christine Roche and Abbie Gibson, a former nanny of David and Victoria Beckham.

As of 28th September 2014 another  19 claims were registered at the High Court and another 10 claimants had indicated they would bring proceedings against Trinity Mirror. Trinity Mirror in a filing stated that it had aside £8m to £9m to settle phone hacking claims and legal costs.