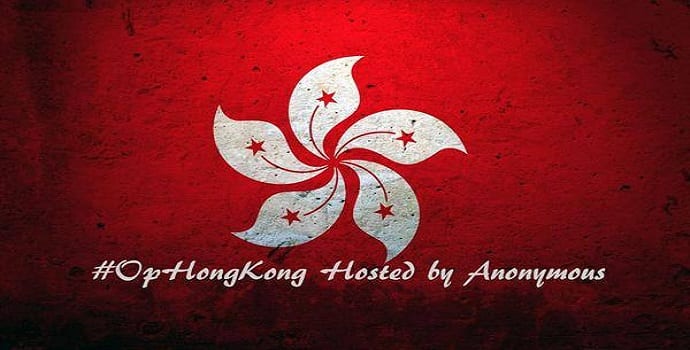 Hactivist collective Anonymous, Antisec  division, declared a cyber-war against Hong Kong for the treatment of protestors there. The group has already defaced several Hong Kong-based websites, and that dozens more would be affected over the next few days. This added tension comes amidst massive protests in Hong Kong, where citizens has amassed in the thousands to fight for democracy. While Anonymous’s actions are pro-democracy, they may renew fears of cyberwar between the United States and China. Many websites that are shut down are down because they are financed by US. Among them Global Voices and e-voting platform. As a response, new voting platform is launched, this time for mobile voting (m-voting) .

“To the protestors in Hong Kong, we have heard your plea for help. Take heart and take to your streets. You are not alone in this fight. Anonymous members all over the world stand with you, and will help in your fight for democracy. To the Hong Kong police and any others that are called to the protests, we are watching you very closely and have already begun to wage war on you for your inhumane actions against your own citizens. If you continue to abuse, harass or harm protestors, we will continue to deface and take every web-based asset of your government off line. That Is not a threat. It is a promise. Attacking protestors will result in releasing personal information of all of your government officials. We will seize all your databases and e-mail pools and dump them on the Internet. This is your first and only warning. The time has come for Democracy for the citizens of Hong Kong. The line has been drawn in the sand. The police are to protect, not trample on, the freedoms and democracy of their citizens. Until justice prevails hack and protest will replace it. The cause of security and democracy will be grounds for the assault on your virtual infrastructure. Take this opportunity to stand down while we give it to you, or it will get a lot worse. Operation Hong Kong engaged. We Are Anonymous. We Are Legion. We do Not Forgive. We do Not Forget. Government of Hong Kong, expect us.”

While BBC is reporting on effects of the protests on tourism of HongKong, people in the streets are disrupted by teargas and police trying to shiver them away.

Umbrella Revolution got its name for umbrellas used to shield protesters from police tear gas. The rousing “Do you hear the people sing?” from the revolutionary-themed musical “Les Miserables” has been adopted as an anthem of the protesters and DJs are playing Rihanna’s “Umbrella” for the executives in the Hyatt bar.

Umbrella symbol of Hong Kong’s protests emerged out of necessity – both due to the weather, and as a form of defence against teargas.

According to Chinaworker.info  the vicious police onslaught of Sunday 28 September produced shock and anger throughout society on a scale not seen before.
This is the most serious political crisis in Hong Kong since its reversion to Chinese rule in 1997. There are some features of a pre-revolutionary situation, with a government in deep crisis having suffered a loss of control and authority. The state institutions – especially the police – are now widely distrusted and despised. The territory’s tenuous ‘autonomy’ as a special region of China is now distrusted or rejected as a fake by a majority of Hong Kong people. A crucial issue is the need to spread the movement across the border, by issuing appeals to workers and youth in mainland China to join the struggle against China’s one-party (CCP) dictatorship
October 1st is China’s National Day and a public holiday in Hong Kong–presages what will undoubtedly be a crucial moment in the protests. Already, both sides are anticipating record turnout–and nobody expects the tension to diminish in the next 48 hours.
Incredible Drone Footage Shows Thousands of Protesters in HongKong in Umbrella Movement:

#OpHK: Some website hong kong were hacked in support of the protesters and against police violence. https://t.co/a1nbzis9qL #AntiSec