Samsung Knox Validated and Approved For U.S. Gov Classified Use

This accomplishment is the direct result of Samsung’s successful testing and certification under the U.S. government’s Common Criteria Mobile Device Fundamental Protection Profile (MDFPP) and VPN Protection Profile (VPNPP) programs. The listed Samsung devices are available for use with classified government networks and data. All devices and capabilities incorporate security features powered by Samsung KNOX.

“KNOX Workspace container improves the user experience, providing security for enterprise data by creating a secure zone in the employee’s device for corporate applications, and encrypting enterprise data both at rest and in motion. KNOX Workspace container provides users with an isolated and secure environment within the mobile device, complete with its own home screen, launcher, applications and widgets for easier, more intuitive and safe operation. Applications and data inside the container are separated.”

The DISA Approved Products List may be found at: https://www.disa.mil/Services/Network-Services/UCCO.

With the breaches and hacks taking place almost everyday, a user entails serious risks to save personal images/docs or videos online in the clouds.  With the iCloud Hacks it was proved that even Celebrities are not safe from hacking.  The SnapChat leaks proved that images of 13 to 17 year old kids were prone to being vulnerable to such leaks.  The Dropbox leaks proved that saving to Dropbox also entails a relatively high risk.

So what do the users do with their images and videos taken in those private moment.  With the approval of the US Government for classified use, the Samsung Knox became the first mobile device to be guaranteed as safe from hackers, no less then by the Big Sam himself.

With unlimited storage (upto 64GB) capacity aboard many of the Samsung products, you are safe on the space option but is the Samsung Knox really the Fort Knox of storing your private documents/images and videos securely.  While the US Government thinks so, a security researcher, Eingestellt von Ares doesnt think so.

Infact Ares has demonstrated on his blog as to why Samsung’s Knox is vulnerable and quite easily too.

How is Samsung Knox vulnerable

Ares has given a full PoC about the vulnerability on his blog, which is reproduced here :

The Samsung phone comes preinstalled with two apps: Knox and Knox EMM. Knox EMM is a enterprise cloud-based management solution for mobile devices which was not part of this analysis. Focus was set to the Knox app, which provides the Knox Container and a seperate (secure) home screen with own apps. The setup for Knox is quite easy, you just have to set a password and a pin for the Knox App. Looking at the system internals, Knox installs quite a lot of stuff on your phone. Knox related apps in /data/data/:
com.samsung.klmsagent
com.samsung.knoxemm.mdm
com.sec.knox.app.container
com.sec.knox.containeragent
com.sec.knox.eventsmanager
com.sec.knox.seandroid
com.sec.knox.store

Additionally all apps which are installed in the new Knox home screen are located in the standard app installation folder /data/data/ and come with the prefix: com.sec.*. Listing all of them here would be too much. After a typical Knox installation there are 139 apps and services installed with the prefix com.sec.*
Looking a bit deeper in the system, Knox is distributed through the whole system and stores data in a couple of different locations, for example: the encrypted container itself will be stored in /data/.container_* and/data/container/.sdcontainer_1.* Different files and databases for settings are stored in /data/system/secure_storage and /data/system/container.

Each analysis of a mobile app starts with a static analysis of the files the app stored after the setup. A good starting point for Android Apps is the app folder under /data/data/. These folders typically have the structure:

|- shared_prefs
Especially the folders databases and shared_prefs are the ones that deserves the first attention. The ContainerAgent app of Knox (com.sec.knox.containeragent) had some interesting files stored:

Yes, guess what is written in the pin.xml file? The pin we had to set during the setup of Knox in cleartext!

Now the Samsung Knox gives a user a maximum of 2o tries for username and password. 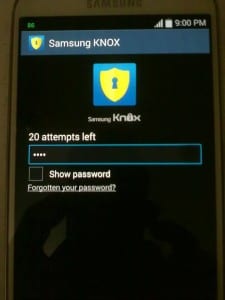 The other files didn’t reveal other interesting stuff. But back to the pin.xml file. What is the purpose of the pin in Knox anyway? If you’re going to start Knox you have to provide your password to get access to the data and the Knox home screen. But there is a small button under the textfield called “Password forgotten?”. By tapping it, you have to provide your pin. If the PIN is correct the Knox app will show you a little password hint (the first and the last character of your password!! + the original length of your password!). So now it is pretty obvious that Samsung Knox is going to store your password somewhere on the device! As mentioned above, Knox is not only storing settings in /data/data/, in the Folder /data/system/container there is a file called containerpassword_1.key [sic!] stored. The content is a crypted string: 72C9EE6D56CB15916A4CAB01814F978FA1E2689D (I modified the string for obvious reasons ;)).

So this looks like an AES encrypted string. No we have to decompile the apps to have a deeper look how exactly the encryption of the password works and where the key for the encryption comes from. Samsungs makes use of dex-preoptimization to strip out all classes.dex files (the java code is stored in a file called classes.dex and this file is parsed by the Dalvik JVM) in the Knox apks, thus making reverse engineering a little bit harder. To get the binaries we have to look at /system/app/ and find .odex files (an odex is basically a pre-processed version of an application’s classes.dex that is execution-ready for Dalvik). odex files can be converted back into smali code, which then can be converted back to a dex file. Finally a dex file can be converted into a jar file, which can be decompiled by any Java Decompiler.

Samsung didn’t make any use of code obfuscation but really tried to hide the password storage code within hundreds of java classes, inheritance and proxies. Finally in the Knox Store app the proxy IDataService was implemented which all other apps were constantly calling when handling something password related. So when saving the password the app is doing the following:
public boolean setData(String paramAnonymousString) {

}
Let’s have a look at each line and the corresponding methods:
public long getInputForKeyGenerate()
{
return Long.parseLong(SecureKeyLoader.getPartialString(getAndroidID()), 16);
}
private String getAndroidID()
{
return Settings.Secure.getString(this.mContext.getContentResolver(), “android_id”);
}
So the input for the key is obviously the unique Android ID which every device has. The 16-Byte ID parsed as Long value is then used as an argument for the function getKeyForPassword:
public class SecureKeyLoader
{
static
{
System.loadLibrary(“mealy”);
}
public static native String getKeyForPassword(long paramLong, int paramInt);
public static native String getPartialString(String paramString);
}

By looking at the subroutine it just adds the long value from the Android ID and the hardcoded string. The method getPartialString substractes a part out of the Android ID. Just for the clarification: every app can ask the system for the Android ID by calling: Secure.getString(getContext().getContentResolver(),Secure.ANDROID_ID);

In conclusion Ares points out that Samsung Knox is not as secure as it is pointed out to be.

Samsung really tried to hide the functionality to generate the key, following the security by obscurity rule. In the end it just uses the Android ID together with a hardcoded string and mix them for the encryption key. I would have expected from a product, called Knox, a different approach:

The key should be derived from a Password-Based Key Derivation Function 2(PBKDF2) which generates a much stronger key with more randomness.
The fact that they are persisting the key just for the password hint functionality is compromising the security of that product completely. For such a product the password should never be stored on the device. There is no need for it, only if you forget your password. But then your data should be lost, otherwise they are not safe if there is some kind of recovery option.

Instead of Samsung Knox, use the built-in Android encryption function and encrypt the whole device. Android is using a PBKDF2 function from the encryption password you choose and never persists it on the device. Obviously you can never access the data if you forget your password, but that’s the point of a good encryption.