Felony Charges dropped for 11 out of 14 #PayPal14 Anonymous hacktivists

If you remember the PayPal14, you will know that 14 hacktivists belonging to hackers collective Anonymous were booked for waging cyber attack on PayPal website.

To briefly recap you, in early December 2010, 1000s of people participated when Anonymous hacktivists launched a distributed denial of service (DDoS) against PayPal. This was to protest PayPal cutting off service to WikiLeaks and Julian Assange in an attempt to shut down their publishing of the dirty laundry of nations in the public. In January 2011, the US Department of Justice issued 40 subpoenas in search of information. In July, fourteen of the thousands who participated had their homes raided and were charged under the Computer Fraud and Abuse Act. They were made to serve as an example to us all, at great personal cost. For four years they have been carrying the stress of their charges and the weight of the threatened 15 years in prison and $500,000 fines each, by themselves. 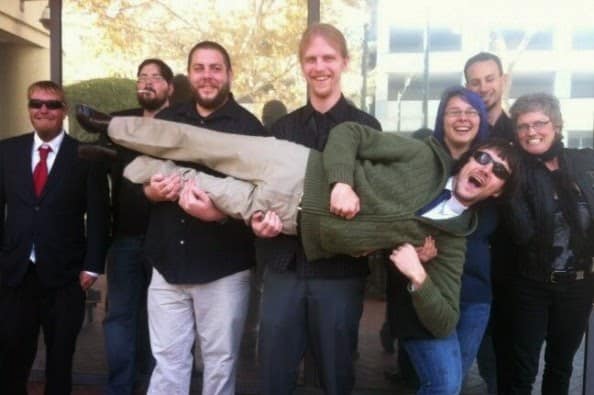 To come back to present, a US court has dropped felony charges against against 11 of the 14 of the above Anonymous-linked hacktivists.  Anonymous has started a campaign to support them both morally and legally and had managed to raise around $86,000 for the legal costs in addition to trending the hashtag #PayPal14 on social networking sites and opening a dedicated website PayPal14.com in their support.

The 11 out the 14 charged, had reached a plea bargain deal with federal prosecutors in December 2013, admitting their participation in an online attack that briefly took down the PayPal website.  After entering guilty pleas to one felony count of conspiracy and one misdemeanor count of damaging a computer, their sentencing was delayed for nearly a year.  Yesterday,defendants appeared in federal court on Wednesday, where the felony charges were dropped.  The court also notified that if the defendants are to demonstrate good behavior and sincere commitment to civil society during that time, they could potentially escape only with probation and restitution payments.

While each of them will still be responsible for paying $5,600 in restitution, that is drastically lower than the $5.5 million in damages that PayPal claimed occurred when its website was taken offline in December 2010. While 11 defendants pleaded guilty to both felony and misdemeanor charges, two others pleaded guilty only to misdemeanors, which carry a potential prison sentence of 90 days. The final member of the PayPal 14 was not eligible for a plea deal, as he stood accused of helping a separate group of people take down other websites around the same time.

Anonymous are obviously elated at the resolution of long standing grievance they had with the system. They have always believed that what PayPal did was wrong and WikiLeaks funding shouldnt have been stopped.  The #PayPal14 was top trending hashtag on Twitter as the news of dropping of felony charges on the PayPal hacktivists filtered through.

We owe the #PayPal14 a debt of gratitude. Let's show them how thankful we are by helping them pay their ransom: https://t.co/g0cgcr67e0

#Tech trends have come and gone, but our belief that #PeopleRule hasn't: https://t.co/4iFUOzL03n. #PayPal15 pic.twitter.com/C5ghK8KkXO

PayPal is meanwhile using its own might and financial muscle to trend a #PayPal15 on Twitter in celebration for completion 15 years of successful run since its inception.  Many Anonymous supporters were flummoxed at the #PayPal15 hashtag trending on Twitter and jeered PayPal for being a sore loser.  While the marketers called it a “marketing fail” a synonym for a failed marketing strategy.   Anonymous on its part claimed PayPal’s move was directed to  “censor” the #PayPal14 hashtag and keep it from trending.

Yeah @small_affair it looks like @PayPal tried to commit noise censorship to drown out #PayPal14 but failed miserably.

RT @off_the_grid_: #paypal15 is a lame attempt by @PayPal to create noise on a day of celebration for the #PayPal14

.@PayPal must have thought it was cute to come up with #Paypal15 tag on the day of sentencing for #PayPal14. SUPPORT: https://t.co/efHX0e4xLJ