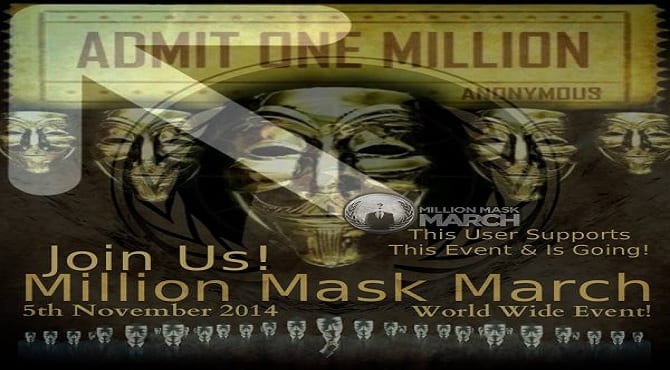 Anonymous, known around the world for their hacking skills and marches all over the world are preparing for their annual,
Million Mask March.

Love them or hate them, they are getting well known world wide and governments are quickly taking an un-liking to them because they expose their lies, corruption and leak sensitive information governments do not want the general public to know.

Their organized protests are known to be peaceful however, outsiders have been known to make trouble or police have been known to use force to disperse them to get rid of them and their likes by hiding the truth and showing the people why they are there for.

This November 5th in just about every capital city of the world, you will witness and see thousands of people wearing Guy Fawkes masks marching for a number of reasons, such as standing up to government corruption, big corporations, companies like Monsanto, groups like the Bilderberg Group, the Elite or the 1% to the rich bankers and families like the Rothschild’s and Rockefellers.

The date for Anonymous to hold this march being November 5th is explained in more detail here https://en.wikipedia.org/wiki/Guy_Fawkes_Night

And a video here

No matter what the meaning or history is about Guy Fawkes, the world will see a united Anonymous as one group, literally flood the city streets, fearlessly showing the world and governments that they and the 99% that support them, are not afraid of their government and will stand up against all tyranny and unfairness dished out to the people.

Displaying signs, banners and voicing chants, your city streets are going to get loud and busy, with people who care enough to attend and stand up for those until they also “Wake Up”.

Anonymous also go to great lengths to spread truths about many different topics or events and although at times mistakes or incorrect information has been known to be posted on social media, eventually it is corrected and the truth is found.

Anonymous like to be called truth seekers, not conspiracy theorists, as the mainstream media wishes the public to refer them by.

Many people are told by the mainstream media that ANONYMOUS are terrorists, run of the mill hackers or just annoying pests and of course all governments endorse this negative opinion they wish the public to adopt because it suits them perfectly in maintaining their power over you.

Sadly, many in the public easily accept this incorrect opinion and believe the propaganda the mainstream media dish out to the public, so as to win support for those in power to justify forcing laws to arrest them or to have the public believe they are not worth the time of day.

The truth be known however, the public are waking up more and more each day and they are listening and paying attention to Anonymous on a very rapid and wide scale.

Topics they discuss and inform about are, about police excesses as in the Ferguson county case, cases of rape victims not receiving justice, exposing the elite or the 1% striving to save our environment, naming and shaming pedophiles to revealing names who kill and torture animals, these and many other topics are being seen by the people and also by trillionaires and billionaires and are rapidly spreading over social media giving those who have been exposed hard and real reasons to be concerned having their addresses, names and personal details plastered all over the internet.

The above seen on social media platforms are receiving much support and gathering favorable comments from everyday people who desire justice because justice is something the people are now realising, is very hard to receive from our current judiciary and law systems where the law upholders are many times guilty of excesses.

This being the platforms used by Anonymous to “Wake the people up” has also got the attention of government leaders and people in power such as the TTP (Trans Pacific Partnership) and others, are now turning their attention to the free flowing and uncensored internet, working on more and more ways to censor the internet and keep a more strict watch on what is being shared, posted and uploaded.

Anonymous being a world wide collective having many skilled hackers and supporters, are always a step ahead of those wanting to censor the internet or force more control of it by banning certain social media platforms like Facebook and Twitter.

Anonymous, have been known to make their unhappy thoughts by hacking many government websites to get their point across causing as much havoc as possible so as to bring attention to governments that Anonymous will NOT stand for, if peoples internet access is to be restricted or censored.

The Million Mask March will occur this November 5th 2014 and having been to last years. I have been to the Million Mask March in Brisbane Australia myself and I can tell those reading this, that if you have never attended a march, rally or protest before, this is your time and chance to do so peacefully, you will not regret it and you will feel like you are being heard and have made a stand for what you believe in or for what you know is right.

Anonymous work very hard using their own time and money to tell the world and it’s citizens what is really going on in our world and how to solve many of our major problems, they spend countless hours posting, investigating, researching and hacking to bring the world information and truths, that our governments and big businesses do not want the people to know.

Anonymous supports all whistle-blowers, fellow activists and fellow anons and because they are divided by zero, united as one, when you attack one Anon you attack us all.

Our world needs people who care about what is really going on because our greedy bankers and corrupt politicians and the ruling elite amongst our governments today, clearly do not care, they are puppets reading from scripts that are read to brainwash the sheeple (lost sheep/people) who trust and believe all what they hear and see from their main stream media and government leaders or representatives. However, this is all just an illusion and our world is in so much turmoil that something must be done before it is too late, thus The Million Mask March.

Will you decide this year to join us, Anonymous invites you.

Click here for more information or to see what anonymous is about https://www.facebook.com/anonymousforjustice

Anonymous also acknowledges the help it receives from professional hackers such as AnonGhost, ASOR Hack Team,  just to name a few and from those Anons who lay low and are never seen or know about but care enough to do much damage over the internet, we thank you.

The writer of this short post about Anonymous and the Million Mask March, hopes to see you there and I am sure the whole World Wide brother and sisterhood of Anonymous agrees with me.

As we all say…

We are Anonymous,
We are Legion,
United as one,
Divided by Zero,
We do not Forgive,
We do not Forget,
(To The Elite of our world, you can)
Expect Us!