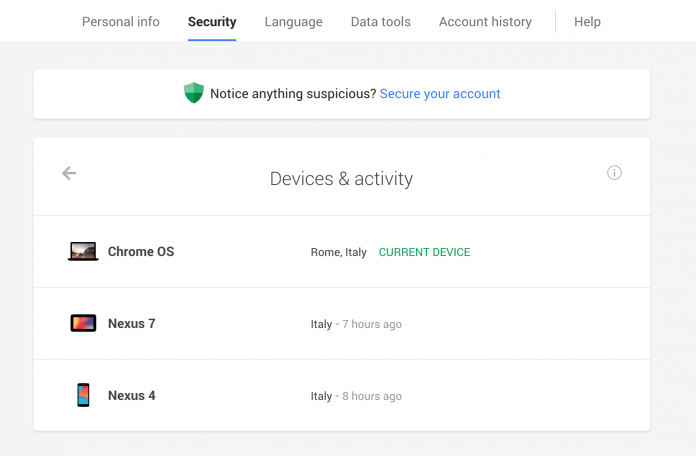 Google on a back to back App launching spree

Google engineers seem to be working overtime this holiday season and as a result the search behemoth is on a app launching spree. Just a day after releasing Santa, the Mac OS X  enterprise level maware spotter, Google has now gone ahead and released a dashboard and security wizard for enhancing the security of  its Google for Work platform. Google today announced the laucnh of a Devices and Activity dashboard to its users and also freed the otherwise paid Zix encrytion for all users and game developers. According to Google, these new features are intended to make it easy for IT administrators to  manage devices, applications and security settings.

This dashboard will show a list of every device and location that was used to access the account in the past 4 weeks giving the user the exact idea of who is accessing what Google account through which device and from where. It will also display details for each device that accessed the account, making it easier to identify each unique device and pinpoint the rogue device, if any. This will make it a lot easier for Google app developers and API users to notice any suspicious activity on the account.

Eran said that users may have to setup the new service in their account. According to him,  a security wizard for Google for Work accounts helps users set up and configure security settings in just a few minutes. Customers can utilize the wizard to provide account recovery information, and review permissions and activity on the account. “This tool prioritizes all administrator settings for security features that end users are permitted to turn on,” Eran added.

Security Key is a security mechanism released by Google in the month of October. Those who want to use Security Key must acquire a FIDO U2F compliant USB device, and enable the feature on their accounts. Once the system is enabled, customers must connect the USB device to their computer and tap it when prompted in the Web browser in order to log in to their account

Zix is an end-to-end encryption standard and Google appears to be giving this free of cost to the users of it Gmail service. A Redditor, makebaconpancakes seems to have noticed it 15 days ago. Reddit users have confirmed the quiet freebie but Google did not reply for a request to comment earlier this month. In fact, a redditor commented that he had paid $16000.00 for Zix just a week ago.  Google previously charged US$35 per user for Zix under its end-to-end crypto Google Apps Message Encryption (GAME) project.

The Google presser on Zix is given below :

When Google Apps users need an email message to be encrypted, that message is routed to the GAME Zone, which then checks the sender’s email address against the white list of users created by the administrator for their domain.

If the user is authorized to send encrypted emails, the message will be encrypted and sent using ZixCorp’s Best Method of Delivery (BMOD). BMOD provides transparent encryption among all ZixCorp customers as well as two different keyless delivery methods for other recipients. The keyless delivery method for GAME customers is Portal Delivery. If the user is not authorized to send encrypted email, an administrator-configured bounce message will be sent back to the sender.