The Indian ISP’s are censoring Internet by blocking Pastebin.com and GitHub.com

The Internet Service Providers of India are blocking access to the popular paste hosting website, Pastebin and the popular Git hosting repository GitHub.  Pastebin, which was opening without a problem in first two weeks of December, 2014 now returns “this page is not available” error.  Pastebin tweeted about the issue on 19th December and made a subsequent post on its Facebook page but neither the ISPs or the authorities are forthcoming about why Pastebin is blocked in India.

https://t.co/e3zRKnJJQO seems to have been blocked in India. If you are from India and unable to visit Pastebin, please email us. 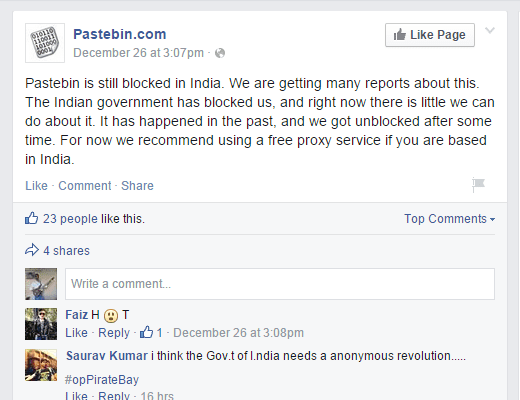 Since 17th December Indian ISPs have started blocking the free Git hosting repository GitHub as well.  No prior information, no explanations, no notice, simple block. The ISPs in India are setting a bad precedent of freedom of speech .  Only one ISP, Reliance returned a message that GitHub has been blocked as per the instructions of competent authority.

@github down in India! 🙁 pic.twitter.com/ZVtX86hbhd

Neither of the two blocks bode well with the Internet users of India, especially the developers and students. GitHub provides a very high performing platform for distributed revision control and source code management (SCM) functionality of Git as well as adding its own features. With its user friendly web-based graphical interface and desktop as well as mobile integration it is a go to tool for developers and computer science students. It also provides access control and several collaboration features such as wikis, task management, and bug tracking and feature requests for every project.

Like GitHub, Pastebin also is a very popular tool for developers and students. The Pastebin web service provides anyone to store pastes in plain text and almost all popular coding languages. The Pastes are most commonly used to share short source code snippets for code review via Internet Relay Chat among the dev teams.

Like every other Internet service, Pastebin has its flaws. It has been used by cybercriminals to fleece users with fake data leaks or credit card details.  It is also used by hacker groups to call on their worldwide members to set up DDoS or other attacks on websites. But the positives always outweigh the negatives in the long run.

Yesterday, Vodafone apparently blocked Imgur access to its users inadvertently.  The Department of Telecommunications had instructed Vodafone to block a particular Imgur url which posted a offending image but Vodafone engineers blocked the entire domain.  Later on the issue was resolved and Imgur is now available across all ISPs.

The regressive steps like banning Pastebin and GitHub spell bad news for the fast growing Indian economy. With services sector providing estimated half the Indian GDP, the authorities, in fact should encourage developers and students to get more and more assimilated with world development community. The ban does exactly the opposite. It makes normal internet users use proxy services and VPNs to access what should normally be available for them.

With Airtel’s blatant violation of net neutrality earlier this week, the banning of Pastebin and GitHub will further be a black blot on Indian democracy and freedom of speech.  Hope the Indian government looks into the matter with a long term perspective rather than short sighted ban.