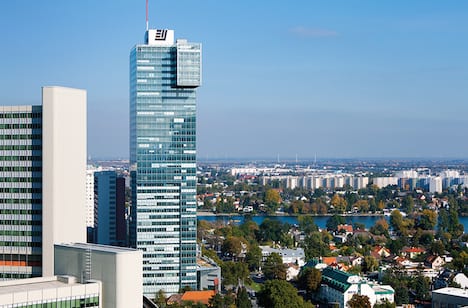 A presentation in Hamburg at the annual meeting of the Chaos Computer Club by Austrian journalist Erich Möchel detailed the various locations, in Vienna, where the NSA (National Security Agency) has been actively collecting and processing electronic intelligence.

Möchel’s detailed his findings from documents leaked from secret archives within the NSA and CIA brought to light by Edward Snowden a former systems administrator and defense contractor with Booz Allen Hamilton, currently in exile from the U.S.

According to Möchel the documents illustrate a robust clandestine NSA operation within the Austrian capital. With working relations involving more than 17,000 accredited diplomats working within the United Nations, IAEA, UNIDO, CTBTO, OSCE and OPEC.

According to Emil Bobi a Austrian investigative journalist, almost 1 percent of Vienna’s total population have diplomatic status – with a significant probability of that percentage being NSA spies, with an estimate of over 7,000 spies and agents living in the city. Siegfried Beer, director of the Austrian Centre for Intelligence, Propaganda and Security Studies, at the University of Graz, agrees that there are at least 7,000 agents based in Vienna, working in embassies and international organizations.

The NSA spying targets are likely oil-rich Arab states that meet regularly in OPEC as Vienna has long been the centre for East-West spy activities.

Möchel reports there are currently three major NSA stations in Vienna. The first one in the US Embassy of Vienna’s 9th district.

The second station is positioned on upper floors of the Internationales Zentrum Donaustadt (IZD) tower, overlooking the Vienna International Centre, the third-largest home for United Nations-affiliated organizations, specifically the International Atomic Energy Agency. Serving as a multi purpose station responsible for electronic surveillance of important UN-related activities, as well as coordinating SigInt from other foreign embassies.

The third station called the “NSA Villa” location in Pötzleinsdorf. Möchel reports, the villa was previously tasked with collecting more analog forms of intel, based on older technologies, which is largely being phased out, while the staff there are being relocated to the second IZD tower.

Each of the three stations are connected by a secure broadband network, with a radio tower in Exelberg serving as a relay station. The core of the operational processing takes place in the second IZD tower.

Möchel reports that the NSA’s Special Collection Service EINSTEIN/CASTANET is located on the top floor of the U.S. embassy in Berlin and elsewhere (Special Collection Service). While not specifically used as a conventional transmitting antenna system, it is suspected of being used for transmitting/illumination/RF flooding/etc. Essentially a wideband microwave SIGINT (bug repeater, telco microwave backbones, WiFi, GSM/cellular, satellite up/downlinks, GBPPR, etc.) collection system.

Air-conditioning plants has been recently added to the tower suggesting that additional computers were likely installed. Very often mobile phones and devices often fail to receive signals there, indicating the likelihood of localized jamming or other security measures being employed in that area.

The leaked Snowden documents strongly suggest that the NSA has successfully infiltrated the mobile and data networks of Telekom Austria on occasion.

Erich Möchel has done a good job sorting through Snowden’s leaked documents to sort this out. The NSA is doing what the NSA does spy on as much as they can. With over 7,000 working spys in the area it is popular because of the high quality of life, and its geographical location and Austria has been an international spy hub since the late 19th Century, when people from all parts of the Austro-Hungarian empire flocked to the city. Making this a very fertile pruning ground for spy activity.

Some details can be found here. Also global collection layouts can be seen here.