A team of Biohackers have successfully induced night vision in healthy human eyeballs which would allow them to see through a distance of 50 meters.

Science for the Masses, a Biohackers group based in Tehachapi, California, were experimenting on a method that would be able to enhance a healthy human eyesight with night vision. The group used Chlorin e6  or Ce6 which is a kind of chlorophyll analog found in some deep sea fish, alternatively the chemical can also be extracted from algae and it has been used safely for cancer treatments. It was also found that small doses of  Ce6, which is occasionally used for treatment of night blindness, can provide a night vision in healthy eyesight for a short term.

As per the report from Science.Mic Jeffrey Tibbetts, the medical officer of Science for the Masses and biochem researcher Gabriel Licina together as a team have got a patent for their research paper known as “A Review on Night Enhancement Eyedrops Using Chlorin e6.” 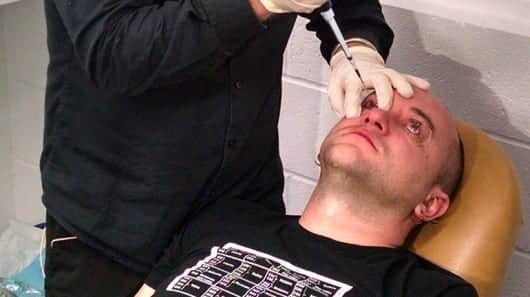 Now the team decided to carry out their first controlled experiment in what seems to be a sort of garage and Gabriel Licina agreed to become the guinea pig. Tibbetts slowly dripped about 50 microliters of Ce6 using a fine turkey baster (a sort of pipette) into Licina’s eyes which was stretched out using a speculum. 50 microliters of Ce6 is usually a very low dose and Tibbetts aimed at the conjunctival sac to drop the chemical which then was carried till the retina. “To me, it was a quick, greenish-black blur across my vision, and then it dissolved into my eyes,” Licina told Mic.

As per the patent the actual effect of this induction would start after almost an hour. During this waiting period Licina had to use protective contact lens along with sunglasses to shield his eyes from the indoor light as his eyes had now become more sensitive.

The full effects of Ce6 kicked in after about an hour and the team conducted some control tests in a dark field to check the result of the induction. Licina and a control group comprising of three other researchers who were not subjected to the Ce6 dose conducted three different subjective tests at about a distance of 50 meters.

Regarding the results of the tests Tibbetts has written in his report that: “These consisted of symbol recognition by distance, symbol recognition on varying background colors at a static distance, and the ability to identify moving subjects in a varied background at varied distances.” As per Mic report Licina gave 100% result as he was able to identify the objects and symbols in all the tests however control group researchers with regular eyesight had only a 33 percent success rate.

The team has plans to carry out rigorous tests to get more solid data as the initial test conducted was a great success however the effect of Ce6 is there only for few hours hence now the team wants to conduct the tests with longer hours of the induction effects. Also Ce6 was able to give a vision of objects which were placed at about a distance of 160 feet in dark woods.

Well for now Licina says: “You take it and quantify it and write it down, and release it. … This is how science works. It isn’t flashy. But it makes it more accessible. It shows it can be done. If we can do it in our garage, other people can, too.” Truly Biohacking which is a combination of science and biology together can really make things happen and this night vision can be used in future by rescue teams to search someone in the dark forest and even in hostage situations.