Telephone took 75 years and Angry Birds took 35 days. What does that mean? It means the rate at which technology is spreading is truly tremendous!!

“Angry Birds Stella Pop” was released in December 2014 by Rovio Entertainment, the maker of the classic Angry Birds franchise and within a matter of just 35 days the game is available on the Android and Google Play store since 12th March 2015.  During its release worldwide on the Android and Google Play store Teemu Hämäläinen, Production Director, said: “We’re proud to share Angry Birds Stella POP! with fans worldwide today. Since we soft launched in Canada, we have been receiving great feedback. Fans are super engaged popping bubbles and toppling piggies.This is Stella’s second standalone game and fans will love joining in on her journey with her pals.” 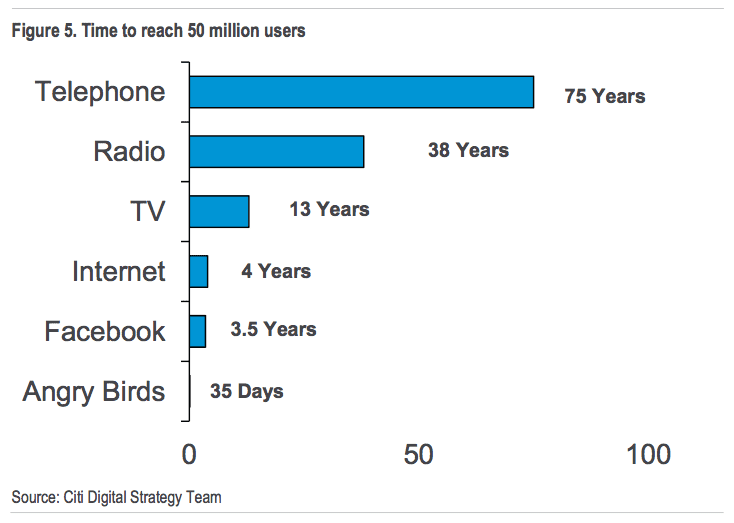 Its just amazing to see that technology is advancing at a such a speed; just have a look at Apple store or any electronic store for that matter, one is sure to get the latest technology everywhere. A couple of years back to have a camera on the smartphone was a big thing and today we have so many smartphones with the latest technology embedded in it. Take the example of Apples Laptops its new Mac Book is one of the thinnest laptop available in the world today. According to a new research report by Oxford University economists: Carl Benedikt Frey and Michael Osborne: “These electronic riches are just a part of a larger wave of innovation that is upending economies and creating new challenges for workers”. In their previous report also the authors had mentioned that the rate at which technology is advancing and most of the work is being automated, over next two decades half of the U.S employment would be automated and hence workers will have to face a challenging environment to get jobs in U.S. The authors also said: “It took on average 119 years for the spindle to diffuse outside Europe. By contrast, the Internet has spread across the globe in only seven years.”

In response to Frey and Osborne’s study Scott Stern, an MIT economist recently commented :“While there is some evidence that the pace of diffusion has increased, particularly in areas of media and electronics, it’s nonetheless true that in many ways diffusion is a very slow process.” Stern studies the effect of new inventions and how it spreads and according to him any new invention is basically fundamental and hence “Change” would happen slowly. According to Stern: “The adoption of telephones, for instance, required the construction of a massive network of wires and switches.” Since the electronic network is already available it is much easier for any computer/Android app to spread at the lightning speed. However, it is has taken long years to build an infrastructure which ultimately connected millions of people across the world. In the end he concluded that with technology, connecting the entire world has become much easier as in case of the Angry Birds; however he has doubts in regards to complete shift into automation due to technology.

Think we need to wait and watch the effects of technology in the long run!