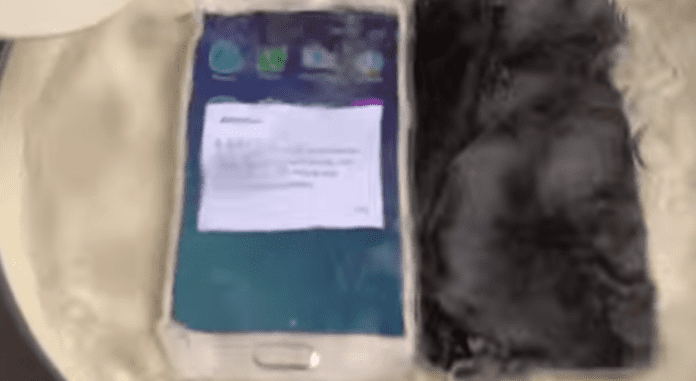 See what happens when you dunk the iPhone6, Galaxy S6 in boiling water

You are making a delicious spaghetti dinner and accidentally your favorite iPhone 6 or Galaxy S6 falls into a vessel of boiling water. How would your device hold its stand?

Well, you need not waste time to think about it any longer. YouTuber TechRax decided to find out the answer for this burning question. TechRax immersed both the phones in a vessel of boiling water to find out which one would its stand for a long time.

To start off, a brand-new, fully working Samsung Galaxy S6 and iPhone 6 priced at $199 from Verizon, TechRax switched on the stopwatch app before dunking the phones in boiling water simultaneously at the same time. Please note that both the phones are most definitely not waterproof and this should not be tried at home.

After dropping them into the vessel, the iPhone screen turned into white almost immediately, then completely turned to black just after 10 seconds, while the Galaxy S6 was still ticking. “Man, 10 seconds for the iPhone 6, what is this?” the YouTuber says in disbelief.

At the end of 30 seconds, TechRax reduces the heat to prevent the water from boiling over, but the Galaxy S6 is still going strong, keeping time. At 55 seconds, the Galaxy S6 screen goes black for a brief time, however, then comes back on to display a warning message that the phone is overheating. You might be thinking that at this point, the Galaxy S6 is the winner, but wait not so quick.

The Apple logo appeared on the iPhone 6 screen, the moment both the phones were removed out of the boiling water, indicating that it might have survived the test. TechRax then poured cold water on both the phones to cool them off enough the handle, and the iPhone started to show a hint of life with its faint Apple logo while the Galaxy S6 looked nothing but dead.

He then attempted to switch on the Galaxy S6, but it did not work. “Wow, so the iPhone 6 gets that last laugh,” the YouTuber says. However, a few more seconds later, the Apple logo vanished as well.

You May Also like: The Galaxy S6 Edge bends just as much as the iPhone 6 Plus