Chris Roberts sent out the above tweet during a flight and little did he imagine all hell would break lose. He forgot the first rule about flight club.

What is the first rule of flight club? No, it’s not “don’t talk about flight club”. The first rule is: do not tweet about hacking flight systems when using the on-board Wi-Fi. But pro hacker and founder of One World Labs, Chris Roberts, did just that on a trip from Denver to Syracuse yesterday. His tweet wouldn’t have made much sense to the average Twitter.

Unfortunately for Roberts, the tweet made perfect sense to the US federal officials, who were scanning the communications and picked up on the references to on-board communications systems.

Roberts said when the flight landed, he was grabbed by FBI agents, questioned for four hours and when Roberts declined to hand over his computing equipment, they seized it all, including an iPad, a MacBook Pro, three hard drives, a flash drive and some USB sticks. Luckily he got to keep his phone.

The long list of confisticated materials is given below : 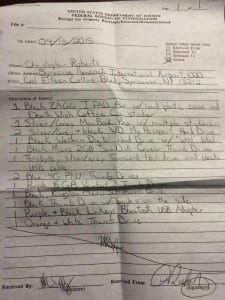 Roberts said that all the electronic goods confiscated from him were encrypted and the feds may have a tough time decrypting them.

Roberts told Forbes that he was a researchers and was actually helping the authorities. he was disconcerted by the actions of US law enforcement. “Feds have known about issues in planes for years, why are they hot now? I’m a researcher, that’s what I do, I don’t go out to harm or hurt, why pick on researchers? If not us then who will find flaws?” he told Forbes.

Given the US Government Accountability Bureau (GAO)’s latest warnings that most modern airplanes in United States are susceptible to hacking, the authorities are on a heightened alert. Roberts may thank his lucky stars that his tweets did not refer to compromising flight control technologies in the plane. That would have meant a long long time in prison.