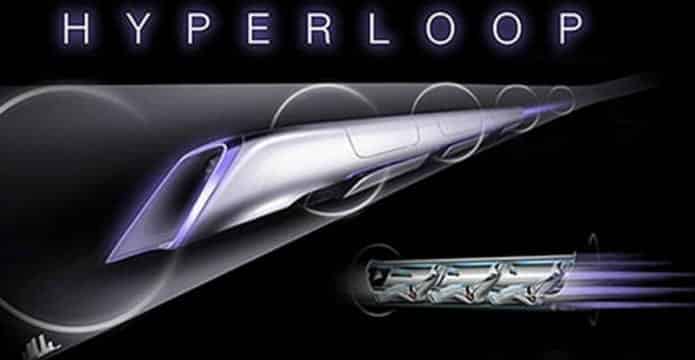 Building the test track for the much awaited “Hyperloop” high speed train is expected to cost around $100 million.

Elon Musk, a billionaire entrepreneur and CEO of Tesla Motors and SpaceX was the first one who proposed the idea of hypothetical “Hyperloop” in the year 2013.

Hypothetical Hyperloop trains are expected to travel faster than airplane and now a start up company has signed a deal to built test track for the proposed Hyperloop train in central California.

The 5 mile (8 Km) pilot project tracks would be build earlier next year and this is a crucial step towards building the much awaited fastest Hyperloop train.

Musk proposed that small pods or capsules carrying passengers would be made to pass through low pressure tubes at an incredibly higher speed. Hyperloop is expected to move at a speed of around 750 mph or 1,200 kmph.

Theoretically, the system is energy efficient and much cheaper and it could transport passengers from Los Angeles to San Francisco in about just half an hour, which is unbelievable.

Last year, Musk admitted that he was not able to devote time to the project inspite of having complete details of the proposed Hyperloop,

Thus a start up company, Hyperloop Transportation Technologies, Inc., a company which is neither linked to Musk or Tesla, got into crowd funding campaign to promote the Hyperloop project. As per a recent market research from the Navigant Research group, the company has signed a contract with some landowners and is now planning to build a pilot track of 5 mile i.e. 8 km along California’s Interstate 5 Highway, that connects LA with San Francisco.

How would the Hyperloop work:

Musk had laid out designs for the Hyperloop in his paper that was published in the SpaceX website. His description of the hi tech transport was “a cross between a Concorde, a rail gun and an air-hockey table.”

Musk had proposed that small pods carrying passengers would be made to travel under partial vacuum inside a giant tube and these pods would move at an accelerated speed with help of magnets. The outer side of the pods would be attached with fans which will provide the required cushion of air on which the pod will move smoothly. Further the system would draw its energy from the solar powered panels that would be built along the length of the giant tube.

The small pods used here would be able to travel much faster because of negligible friction between the wheels and track which is usually encountered in a typical train or any sort of air resistances that is a common factor for reducing the speed of any vehicle.

The engineers further believe that Hyperloop would be able to achieve a speed of about 1,200 kmph along a 100 mile (160 km) track.

In an interview with Wired, engineers said that the speed might even get faster and reach upto 6,500 kmph (4,000 mph) and with this speed passengers can reach China from New York in mere two hours in the super speedy Hyperloop.

Towards the end of April we had seen Japan’s  “Maglev” (Magnetically levitated) bullet train owned by Central Japan Railway Co. (JR Central) had set a new world record by hitting a speed of 590 kilometers per hour which is as good as 366 mph. Maglev trains, the world’s fastest trains are in operation in Shanghai, Tokyo. It works by using magnets for propulsion as well as lifting the train.

On the other hand, Hyperloop uses magnets for propulsion and for the lift it relies on the compressed air.

Check the digital demonstration of Hyperloop system below:

Theoretically, it seems the super speedy Hyperloop is achievable; however as of now Hyperloop is surrounded by considerable number of doubts and questions such as whether it will be safe to travel at such an incredible speed, whether such a system is practically possible and so on.

James Powell, a retired physicist and co-inventor of the superconducting maglev concept told Tanya Lewis over at LiveScience: “The whole system is vulnerable to a single-point failure. The guideway [track] has to be built to very fine tolerances, because if the position of the wall deviates from straightness by a few thousandths of an inch, you could crash.”

For now, the test track will answer most of the questions and help the team to solve any issues that would arise when the actual hypothetical system will carry out its pilot run. The pilot system is expected to run at a speed of 322 kmph (200 mph) which is quite slow when compared to Maglev trains, however the test will just prove if Hyperloop would work in reality or no.

In a separate announcement, Musk said he would be building his own 5 mile Hyperloop test track, mostly in Texas, basically this would be on an experimental basis for companies and students.

The test tracks are being laid out to carry out the pilot test of Hyperloop train to check if the concept works.

Once the concept gets acceptance then the team will focus on scaling up the project.

In current scenario the estimated cost of the project to build a 5 mile test track is $ 100 million. Though this seems to be too costly, however in comparison to the proposed $67.7 billion cost estimated for California High Speed Rail project, this cost seems feasible.

Hyperloop which seemed to be an unachievable and hypothetical idea has taken a crucial step by signing the deal for its pilot project and hence it would not be long when Hyperloop trains will be reality!

So the day is not far when a person would actually reach China from New York in just two hours!! Time will let us know if this is possible.