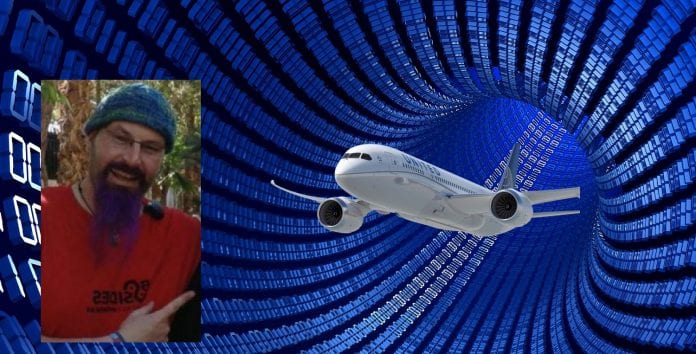 Chris Roberts made a off-the-cuff tweet about hacking a United Airlines flight’s computer system while flying, the tweet was enough to set forth a chain of reactions.

Later came the prosecution documents filed in a US court which revealed that Roberts had told FBI on countless occasions that he could make a plane fly sideways by hacking it.

Can a Airplane be hacked? Was Roberts right in hacking a plane? Was he right in boasting it public through social media? Had he crossed the sacred white hat hackers line in hacking a plane? There are lot more questions than answers to the whole mid-air plane hacking saga. We attempt to answer those.

The experts world over are divided on Robert’s white hat exploits. While some say that Roberts is lying other say that it is indeed possible to hack a plane. Hacking guru, Kevin Mitnick calls the plane hacking a bluff.

As far as this controversy about controlling aircraft from the entertainment system, I'll believe it when I see it otherwise I call bullshit

Here is a interview of John McAfee with Luke Rudkowski where he explains Roberts’ point of view in the whole plane hacking episode.

This brings us to the most important question in the whole plane hacking saga. Was FBI right in hounding Roberts for making the tweet? Roberts had been working on airplane security since 2012 which can be seen in YouTube presentation here.

Was Roberts working on some top secret hacking program in collaboration with the US authorities and somehow his off-the-cuff tweet blew a lid of the covert program. However, this seems a remote possibility as of now. Did NSA and FBI know of this vulnerability and were pissed off with Roberts for making it public through a tweet.

Experts have already said that plane hacking is possible and can be destructive. In fact, an aviation expert has already gone on record to state that the ill fated GermanWings Airbus A320 crash in the Alps may have been caused by hackers.

We will only know that once more details are made public. However since no charges have been filed against Roberts other than confiscating his laptop, mobile and electronic paraphernalia discreetly points to this fact.

So if Roberts made a genuine attempt to find the vulnerabilities for greater good, it should be accepted by the experts.  Yet however well-placed Roberts’ intentions, his decision to broadcast the vulnerability on social media can be criticized as a big mistake.