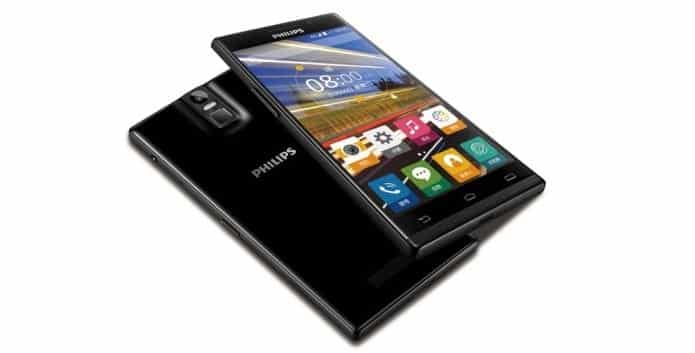 As smartphone markets get more and more competitive and lucrative, big tech companies like Asus are venturing into it. Leaks suggest the the electronics giant, Philips is also looking to enter it with a new Android powered smartphone dubbed Philips i999.

Philips has already received certification from China’s FCC equivalent website, TENAA, revealing most of its specifications of its upcoming smartphone

According the the papers filed with TENAA,  Philips i999 will have a 5.5-inch QHD display  at 2560 x 1440 pixel resolution. It will be powered by a quad-core processor clocked at 2.5GHz whose make is not known. Philips i999 will be powered by 3GB of RAM, and come in a single 32GB internal storage version without any external memory.  For creativity, Phillip i999 will have a neat 20MP main camera with dual-LED and dual tone flash, plus an 8MP front shooter for selfie taking.

Philips i999 will run on Android 4.4.3 KitKat and will be updated to Android 5.0 Lollipop after the launch.

Leaked press renders on Chinese media website IT168 give some images to us. The photographs show that the phone is equipped with 3 capacitive buttons located below the display, including back, home and recent apps / overview. They also reveal that Philips i999 will have a rear-facing fingerprint scanner just below the camera sensor and LED flash.

Philips already has a couple of smartphones in the market however Philps i999 points a flagship devices so we can be sure more will follow if this one succeeds in drawing buyers.