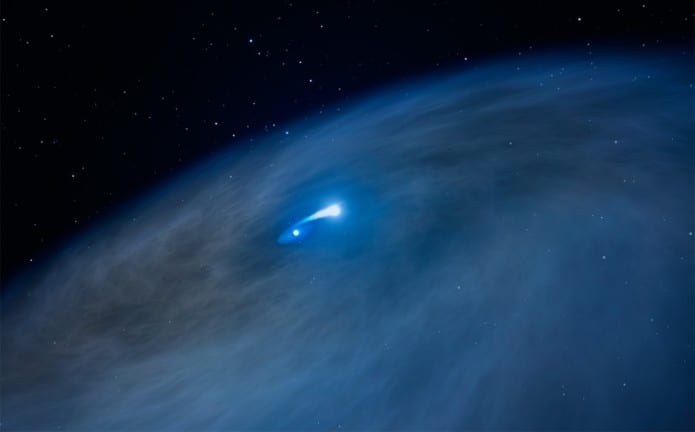 Recently, the Hubble Space Telescope (HST) detected a massive, fast aging and mysterious star for the very first time in our galaxy. This star was not only unique but it also showed some strange behavior due to which astronomers named it as NaSt1 nicknamed as ‘Nasty 1’.

Further, HST captured the images of some unconventional disk that surrounded the NaSt1 which astronomers believe must have been formed due to the gravitational interactions between Nasty1 and it neighboring star.

Some fifty years back, astronomers had spotted a fast evolving star which was much greater and larger than the Sun and named it as Wolf-Rayet star. It was observed by the astronomers that Wolf-Rayet stars are actually the final stages of a massive star which are roughly 20 times the size of Sun. Just before its collapse, the star tends to loosen out of its hydrogen layer abruptly and at a very high speed, thus exposing its super hot, blinding and bright helium based core.

Most of the times the Wolf-Rayet stars display clear twin lobes of gases extending from opposite ends of the star. Under normal conditions, the nearby stars capture the gas released from the Wolf-Rayet stars leaving behind a dying stellar which has a helium core mostly stripped of its hydrogen content.

‘Nasty 1’ was much different, strange and nowhere resembled the previous Wolf-Rayet star because it was surrounded by a disk of gas that extended 1,000 times wider than our Solar system, instead of poles of gaseous materials towards its extreme ends as is the case of Wolf-Rayet stars.

Jon Mauerhan, a lead researcher from the University of California, Berkeley said: “We were excited to see this disk-like structure because it may be evidence for a Wolf-Rayet star forming from a binary interaction.” He also added: “There are very few examples in the galaxy of this process in action because this phase is short-lived, perhaps lasting only a hundred thousand years, while the timescale over which a resulting disk is visible could be only ten thousand years or less.” Thus Nasty 1 proves to be an unique find by the HST.

The research team proposed several theories to suggest the age and formation of this unique ‘Nasty 1 star’.

Researchers believe that the rapid evolution of the star is due to a speedy decline in its hydrogen layer which causes its swelling. This is the best possible theory which researcher believe explain the unusual behavior of Nasty 1. Further, researchers also feel that such an occurrence can be expected in few stars however it is unusual and rare in case of the usual stars.

As per researcher’s estimation Nasty 1 is only a few thousand years old and located at about 3,000 light years away from Earth.

One of the researchers from the University of Arizona, in Tucson, Nathan Smith, said that Wolf-Rayet stars are very difficult to form and based on the previous studies they ultimately concluded that the mass loss of the star is not as strong as it was assumed. He further added: “Mass exchange in binary systems seems to be vital to account for Wolf-Rayet stars and the supernovae they make, and catching binary stars in this short-lived phase will help us understand this process”.

Studying the Nasty 1 star  involved long term extensive research and it was a tedious process because the star is in its evolving state and further covered in gas and dust. In addition, the star presented a limited view through the HST thus increasing the difficulty to the astronomers.

Mauerhan, predicts: “Nasty 1 could evolve into another Eta Carinae-type system. To make that transformation, the mass-gaining companion star could experience a giant eruption because of some instability related to the acquiring of matter from the newly formed Wolf-Rayet. Or, the Wolf-Rayet could explode as a supernova. A stellar merger is another potential outcome, depending on the orbital evolution of the system. The future could be full of all kinds of exotic possibilities depending on whether it blows up or how long the mass transfer occurs, and how long it lives after the mass transfer ceases.”

The entire research team is totally excited to observe this unique star and further continue their advanced research with several predictions regarding the fate of this unique star with many unanswered questions such as whether there will be mass transfer or will it further blow up and what will be the life of the stellar once the complete mass transfer ends.