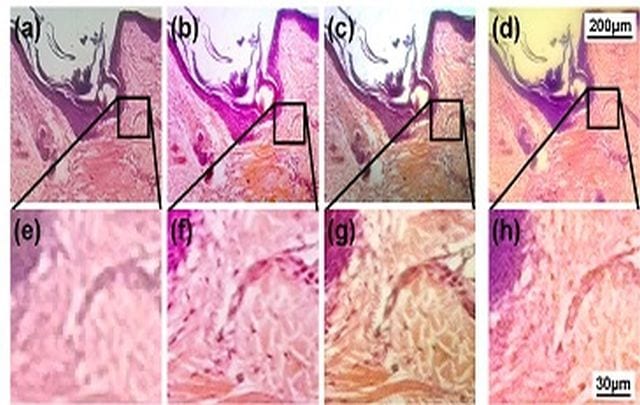 An optical lens has been designed by the researchers at the University of Houston that can be kept on an low-cost smartphone to make images larger by a magnitude of 120, costing just 3 cents a lens.

Wei-Chuan Shih, assistant professor of electrical and computer engineering at UH, said the lens can work as a microscope, and the cost and comfort of using it — without the assistance of any additional device, it is directly attached to the smartphone camera lens — making it perfect for use for younger students in the classroom.

He also said that it could be used for clinical applications, which would allow small or remote clinics to share images with specialists located somewhere else.

According to the paper published in the Journal of Biomedical Optics, Shih and three graduate students illustrate how they make the lenses and inspect the image quality. Yu-Lung Sung, a doctoral candidate, acted as the first author; while others involved in the study include Chia-Hsiung Lee, a former graduate student at UH currently working in the technology industry in Taiwan and Jenn Jeang, who will start graduate school at Liberty University in Virginia this fall.

The lens is made of polymer with the consistency of honey which is also known as polydimethylsiloxane (PDMS), is put exactly on a preheated surface to cure. Sung said that Lens curvature — and hence, magnification — depends on the duration and at what temperature the PDMS is heated. The resulting lenses like the soft contact lens, are flexible, although they are thick and slightly small. “Our lens can transform a smartphone camera into a microscope by simply attaching the lens without any supporting attachments or mechanism,” the researchers wrote. “The strong, yet non-permanent adhesion between PDMS and glass allows the lens to be easily detached after use. An imaging resolution of 1 (micrometer) with an optical magnification of 120X has been achieved.”

Conventional lenses are made by making the surface smooth with machine or injection molding of materials such as glass or plastics. Liquid lenses are available, too, but the ones that aren’t cured require special housing to remain constant. An additional device is required for other types of liquid lenses to stick to the smartphone. This lens fastens directly to the phone’s camera lens and remains joined, Sung said; it is reusable. As specimens for the research study, researchers took pictures of a human skin-hair follicle histological slide with both the smartphone-PDMS system and an Olympus IX-70 microscope. They said that the smartphone lens at a magnification of 120 was equivalent to the Olympus microscope at a magnification of 100 and software-based digital magnification could increase it further.

Shih is primarily employed in the Department of Electrical and Computer Engineering, but he is also attached with the Department of Biomedical Engineering and the Department of Chemistry. His interdisciplinary team is concentrating on nanobiophotonics and nanofluidics, persevering discoveries in imaging and sensing, including work to improve environmental safety and medical diagnostics. Sung said he was making use of PDMS to build microfluidic devices and as he worked with a lab hotplate, he became aware of the material cured on contact with the heated surface. Curious, he decided to try making a lens.

“I put it on my phone, and it turns out it works,” he said. Sung who uses a Nokia Lumia 520 made him say that the resulting microscope came from “a $20 phone and a 1 cent lens.” That 1 cent covers the cost of the material; however, it cost about 3 cents to manufacture the lenses in bulk as estimated by Sung and Shih. In comparison, a conventional, research quality microscope can cost around $10,000. “A microscope is much more versatile, but of course, much more expensive,” Sung said.

His first thought of an application for the lens was for educational use — it would be a cheap and easy way for younger students to do field studies or classroom work. As the lens can be fitted to a smartphone, it’s convenient to share images by email or text, he said. And because the lenses are so cheap, it would not be a setback if a lens was lost or broken. “Nearly everyone has a smartphone,” Sung said. “Instead of using a $30 or $50 attachment that students might use only once or twice, they could use this.”

The researchers are currently making the lenses by hand, using a hand-built device that operates similarly to an inkjet printer. However, the production of lenses in bulk will require financing. The graduate students have launched a crowdfunding campaign through Indiegogo and aiming to raise $12,000 for the equipment. They have collected $3,000 so far. Without being discouraged, they have shared the lenses with teachHOUSTON, a math and science teacher preparation program at UH and the Ministry of Education in Taiwan. “I think it will be fun,” Shih said. “We could invite science teachers to watch what we do.”