The one-day sale on Wednesday for members of Amazon’s $99 per year Prime subscription service was similar to an annual sale by China e-commerce merchant Alibaba.

Amazon offered discounts on products ranging from storage sets to robotic vacuum cleaners, generating more orders per minute at the peak than on “Black Friday,” the day after Thanksgiving and traditionally the top retail sales day in the United States, Amazon said. It did not give detailed sales numbers but said it sold 35,000 Lord of the Rings Blu-Ray sets in 15 minutes and sold out a Kate Spade handbag in a minute.

However the pick of the sale was a listing of LG’s latest flagship G4 for just $0.01 without contract. It is not known at present whether some bug in pricing issues lead to the same but the Redditors on BestofPrimeDay subreddit made a beeline to purchase the same as soon as on of them started a thread announcing the same. Redditor DualAxes first posted the thread of the anomaly in the Amazon prime day sale

Most buyers made purchases of upto 5 LG G4s because of the dirt cheap price it was listed at while others raised questions about whether it was a glitch or legit. 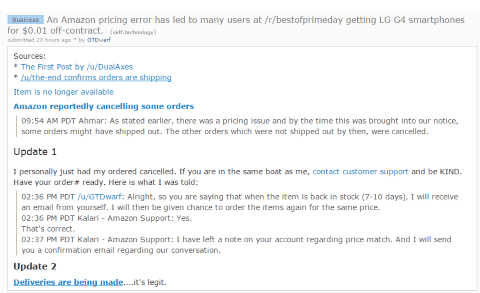 Finally another Redditor, the-end confirmed that Amazon was indeed delivering the LG G4’s at $0.01.

While others commented that their orders had been deleted. It remains to be seen whether Amazon will deliver multiple LG G4s to the people who ordered them or cancel the order citing pricing glitch. If the second one is true, Amazon should hold such $0.01 deals for iPhone 6 as well