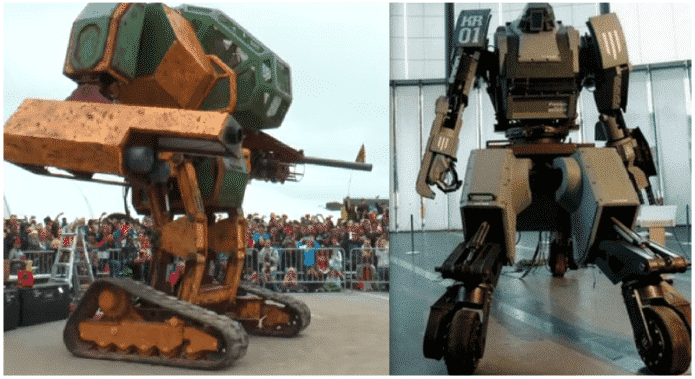 Let the robot wars begin! MegaBots is laying the establishment for what could be the prequel to the giant mech vs. giant monster flick “Pacific Rim.”

There are valid, serious, military technology developments happening in the Pacific. This is not about that. This is about some dudes who have built a giant robot with paintball cannons piloted by two people that seem to come right out of science fiction and they want it to fight a Japanese-made counterpart in an epic battle.

On Wednesday, the video challenge was made by U.S.-based Megabits to Japan-based Suidobashi Heavy Industry to add to the trans-Pacific competition heating up following the USA Women’s National Soccer team beat Germany that same night to face Japan in the Women’s World Cup final on Sunday.

MegaBots co-founder Gui Cavalcanti also invoked Fourth of July patriotism by wearing an American flag as a cape in the video challenge to Suidobashi. Usually to the procedure of a contest, MegaBots threw down the robot gauntlet, so the Japanese can choose the battlefield with its Kuratas mech.

Cavalcanti said, you have a giant robot, we have a giant robot. ”You know what needs to happen. We challenge you to a duel. Both of our robots will need modifications to become battle ready. You name the battlefield. In one year – we fight!”

The estimated costs of building the Mark II and the Kuratas are each around $1.4 million, but the fact that both Japanese and American companies are building giant mechs shows the rapid speed of robotics innovation.

Suidobashi has not yet responded to the challenge as of Thursday, Cavalcanti tells U.S. News. He also told the Japanese office of tech blog Engadget that the Kuratas mech “was made four years ago,” so the company is still considering whether their robot champion is ready for battle against the newer Mark II.
If the challenge is accepted, America’s champion in this epic duel will be the MegaBot Mark II, a 15-foot-tall mech is equipped with guns that can fire paint cannonballs faster than 120 miles per hour.

Defending Japan’s honor would be the Kuratas, a 13-foot-tall mech with room for one pilot armed with BB gatling guns that can be activated using an iPhone. When the robots fight and the dust clears, there can be only one.

A Kickstarter campaign by MegaBots ended unsuccessfully last in the month of November, raising less than four percent of the $1.8 million project goal.

In the meantime it looks like the robot-makers are turning to hopes of an international exhibition match to jumpstart their battles.

When it happens, we’ll see if the Megabot dream of pay-per-view robot battles is within each, or if they’re just terribly trying to punch above their weight.