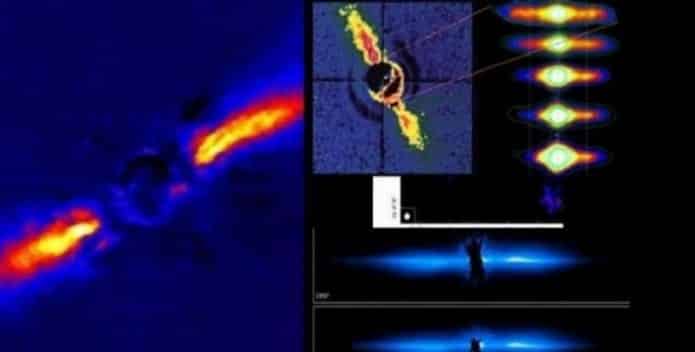 According to Conspiracy theorists, a new study reveals that NASA and U.S. government were aware for quite some time that Planet X (Nibiru) is advancing and it would bring cataclysmic consequences for humanity.

A new scientific study published in 2014 claimed the existence of an anonymous mysterious planet hiding behind Pluto. Scientists were studying the impact of gravitation on the “extreme trans-Neptunian objects” (ETNOs), which are a group of space bodies, while orbiting our Solar System beyond the planet Neptune.

Currently a large number of messages and YouTube videos are being circulated in the conspiracy theory blogosphere and claiming that a NASA study which was published in 1988 had revealed the details about this mysterious Planet X / Nibiru. The study also revealed that Planet X has an orbital period of about 1000 years.

According to Conspiracy theorists, the study demonstrated that insiders from NASA, United States Department of Defense (DOD), SETI and CIA were aware of the advancement of the mysterious Planet X and its cataclysmic consequences. The Vatican has also been informed regarding this rogue Planet X and it is just the public who has been kept in dark regarding the approaching catastrophe.

However, the information regarding the rogue Planet X and its catastrophic consequences on humanity has been leaked despite NASA’s efforts to keep this information a secret.

Conspiracy theorists also believe that the recently leaked files of NASA’s ‘Planet X’  indicates that NASA knew Nibiru was coming. Planet X has a very bad reputation, hundreds of years ago when it had passed through the inner solar system, then its gravitational impact had resulted in disrupting the orbits of other planets. NASA is fully aware that the next disruptive passage of Planet X into the inner solar system is due and expected to be pretty soon.

A statement from Inquisitr says ‘Planet X is approaching Earth and already sending waves of charged “plasmatic energy particles” through our solar system. The flow of energy will finally disrupt the “core flows” of the Earth and trigger catastrophic changes in Earth’s climate.’

Since 1996, the advancement and disruptive effects of Planet X has been experienced on Earth in the form of irregular weather patterns, natural disasters and increased volcanic eruptions and seismic activities.

Researchers have submitted a comprehensive report to White House and it speculates that almost two-thirds of Earth’s population could be completely wiped out during the forth coming pole shift which would be induced by Planet X.

Further, the remaining survivors would have to face extreme starvation and could be exposed to elements and thus would perish eventually in the next six months.

Thus, conspiracy theorists believe that the secretive government agencies are fully aware of this fact and are thus preparing themselves; however the public is still kept in dark and is neither warned nor given a chance to prepare for this doomsday.

Zecharia Sitchin, the world renowned scholar and author of “The 12th Planet” had indicated that the Nibiru would return. He had also stated:

“When Planet X returns, it would remove 90% of currently unsatisfactory human beings from the planet!”

As per Zecharia Sitchin, Planet Nibiru is an alleged planet of the alien Anunnaki which makes a close approach to Earth as it passes through the inner Solar System during its orbital path which occurs once in every 3,600 years. Some conspiracy theorists believe that the Planet X referred to in the NASA files is not linked to this planet ‘Nibiru’, on the contrary a majority of conspiracy theorists insist that NASA’s ‘Planet X’ is the same ‘Nibiru’ which Sitchin had indicated.

As of now it is quite unclear if the Planet X mentioned in the purported NASA files is the same one which scientific researchers had announced in 2014, which is believed to be hiding in our Solar system beyond Pluto.

A research study titled “Extreme trans-Neptunian objects and the Kozai mechanism: signaling the presence of trans-Plutonian planets.” was published in the journal Monthly Notices of the Royal Astronomical Society Letters, in June 2014. The study revealed that our Solar system shows presence of two planets which are larger than Earth and sneaking beyond Pluto which can be detected by their gravitational influences.

Professor Carlos de la Fuente Marcos, at the Complutense University of Madrid and leading the study said: “Observations of the behavior of the ETNOs objects beyond Neptune reveal the gravitational influence of massive astronomical objects beyond Pluto.”

As per the emerging conspiracy theory, NASA’s New Horizons mission commenced in 1990 with its Pluto 350 which is approximately two years after the 1988 publication that revealed existence of Planet X. Now, New Horizon’s final destination is Planet X; however it has not revealed this publicly and pretended that the final destination of their space craft would be Pluto and the Kuiper belt.

In 1990s, NASA leaked fake information that as per the latest measurements by Voyager 2, Planet X does not exist and hence it pretended to have stopped the search for Planet X. However, the truth is that measurements taken by Voyager 2 had shown purported irregularities in the orbits of Uranus which was believed to be due to slight overestimation of Neptune’s mass and hence Planet X was thought to be just an assumption and not a reality.

According to conspiracy theorists, the Planet X hypothesis was just a game plan of NASA scientists to cover up the actual destination of New Horizons beyond Pluto and the Kuiper Belt -Planet X.

Conspiracy theorists believe NASA knows that Planet X does exist in reality and the Armageddon is pretty near.

It was in 1846 when planet Neptune was discovered, the search for Planet X began in mid of 19th century it was astronomer Percival Lowell who first proposed the Planet X hypothesis to clarify the irregularities seen in the orbits of the outer giant planets.

Clyde Tombaugh in 1930 discovered planet Pluto and that compelled some astronomers to announce the existence of Planet X. However, by 1978 scientists discovered that Pluto was too small to actually cause the influences on Uranus and Neptune which had been observed by astronomers. This ultimately led scientists to begin their search for the mysterious Planet X which is suppose to be larger than Earth.

It was in March 2014, when Chadwick Trujillo and Scott Sheppard, announced the discovery of the dwarf planet 2012 VP113, which is believed to be part of the inner Oort Cloud and this work was a proof that a planet larger than Earth ‘does’ lurk beyond Pluto.

The orbital behavior of  dwarf planet 2012 VP113 clearly suggested that it was under the gravitational influence of a massive planet that is lurking in the fringes of our Solar system.

Scientists now believe that there is some anonymous mysterious Planet X lurking in the fringes of our Solar system which could probably be ten times bigger than Earth and could be lying about 250 AU from our Sun.