UFO hunters have spotted an unusually huge alien spacecraft to be hovering around Sun in the official NASA images, could this be an indication that Aliens do exist?

On 15 July 2015, NASA’s Solar and Heliospheric Observatory (SOHO) released a footage of the Sun which has been spotted with a massive alien spacecraft drifting near the hottest star of the Solar system.

The footage has been published on YouTube and Scott C Waring, editor of the website UFO Daily Sightings claims that there is an “Unidentified Foreign Object” (UFO) which seems to be refueling near the Sun.

The footage has been posted by Streetcap1 and the UFO theorist also commented: “This object has structure and for NASA to dismiss it as nothing is an insult to people’s intelligence. If they post data then they must expect UFO hunters to find anomalies and share them.” Streetcap1 claims that the image appearing in the footage seems to be an unusually huge alien spacecraft which is almost the size of the US state of Idaho.

Waring added: “This UFO is awesome. Every time I try to ask NASA about these UFOs on Twitter, they ignore me. They have never answered and refuse to talk about these giant UFOs near our sun. These craft sometimes are even moon size. This one look like its about the size of [the US state of] Idaho, yet does NASA care?”

Waring is also convinced that aliens are sending massive ships to “suck our Sun’s energy.” He also said: “If we are sharing our Sun, it’s not going to last the five billion years scientist predicted it at, but may drop below a billion years before its used up.”

For a long time, humans are trying to get answers whether the aliens and UFOs do exist! In addition the conspiracy theories in regards to the extraterrestrials keep adding their own flavor to these fascinations. Similarly, UFO theorists too come up with their own theories whenever they detect anything suspicious in the space, which they see through NASA’s live feed videos.

Generally most of the people ignore these theories as mere illusions.

Many of them believe that these so called ‘UFOs’ and other dots that are appearing around the Sun are just electrons, ions, atoms which are released during the flare and coronal mass ejections of the Sun. Few of them also believe that these dots are nothing but the lens flare and one viewer has posted a comment that states: “That’s just swamp gas.”

‘Solar Flare’ is actually a sudden flash of brightness which has been observed over the surface of the Sun and scientists interpret it as a huge release of energy wherein 6×1025 joules of energy is released. Most of the times this flare is accompanied by a colossal coronal mass ejection.

However, there are a few of them who actually believe that living entities DO exist and they keep visiting Earth just to observe human lives.

A believer who feels aliens are evolved humans commented in the YouTube says:  “They may be charging the craft with the energy near the Sun.” 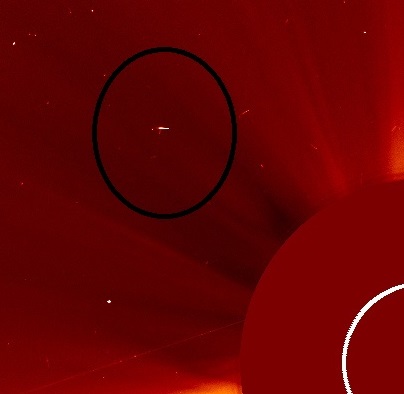 On the other hand, NASA has never supported such theories of alien life visiting Earth and has always refuted these rumors.

At the same time, NASA’s Kepler, launched by the Space Research Organization is trying to discover Earth-like planet by orbiting other stars in an attempt to search for life on planets other than Earth.

Recently, Kepler mission gave confirmation of the first near Earth size planet moving around Sun-like star in the habitable zone.

NASA said: “This exciting result brings us one step closer to finding an Earth 2.0. Kepler-452b is 60 percent larger in diameter than Earth and is considered a super-Earth-size planet. While its mass and composition are not yet determined, previous research suggests that planets the size of Kepler-452b have a good chance of being rocky.”