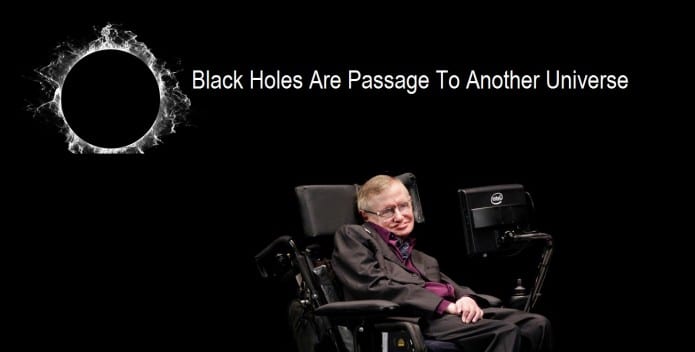 Stephen Hawking says he has solved the mystery of the Black hole but physicists are awaiting proper proof to believe this!

Renowned physicist, Stephen Hawking, director of research at Cambridge University’s department of applied mathematics and theoretical physics, says he has solved the “paradox of Black holes” and according to a new theory proposed by him, humans can escape from black holes though they might not be able to return back to their own Universe.

Earlier, Prof Hawking had discovered that Black holes does not allow anything, not even light, to escape their gravitational grasp and hence they seem to drastically confuse matters. The major concern here was that if information entering a black hole cannot get out and black holes do not even last longer (a discovery made by Prof Hawking) then what actually happens to the information; because law of universe says energy needs to be conserved. After lots of debate it was finally concluded that information needs to escape the black hole. But it is still a mystery which physicists are trying to solve.

During an eight minute public lecture held in Stockholm, Sweden, Prof Hawking said: “If you feel you are in a black hole, don’t give up. There’s a way out.” He further added that he had discovered a mechanism “by which information is returned out of the black hole”.

For a long time physicists have been trying to understand the mystery of black hole and what exactly happens to the information once it gets sucked up and lost into the deadly ‘black hole’ which is an unknown place where the laws of physics does not seem to work.

Prof Hawking gave his lecture at the KTH Royal Institute of Technology wherein the Nordita (Nordic Institute for a Theoretical Physics) hosted the Hawking Radiation Conference.

During the conference, Prof Hawking’s proposed theory was just an attempt to answer the mystery of the “information paradox” which has been tormenting the physicists for years together regarding what actually happens to the things when they go beyond the event horizon and where substance just gets swallowed and where even light does not get reflected thus giving it its name…….Black hole.

Thus, Prof Hawking proposes, there could only be two possibilities. Either the information falling into Black hole breaks out into an alternative universe. Or the other possibility is that it gets translated into some kind of “hologram” on the outer side of the black hole.

During his lecture, Prof Hawking added: “The existence of alternative histories with black holes suggests this might be possible. The hole would need to be large and if it was rotating it might have a passage to another universe. But you couldn’t come back to our universe. So although I’m keen on space flight, I’m not going to try that.”

In a way, the major goal of his lecture was to make physicists and cosmologists understand that “Black holes” are not as “black” or “bad” as they have been painted for years. He also feels that they are not some sort of eternal prisons which are they are believed to be. Prof Hawking also believes things can get out of a black hole and also might reach into some different universe altogether.

Prof Hawking’s announcement did make a sensation in the world of physics and cosmology. However, scientists and physicists studying theoretical physics are awaiting Prof Hawking to publish his study, which is expected somewhere in September, to see the actual proof based on which he has made his announcement.

Caltech physicist, John Preskill, says: “It’s hard to tell what the substance is there, scientifically, to be honest. We should control our expectations until we know more.”

Another Caltech physicist, Sean Carroll said: “I don’t think anyone has a very promising mechanism for how the information can get out. So it would be exciting if Hawking is on the right track with this.”

On the other hand, UC Santa Barbara physicist Joseph Polchinski, says he wants to wait and see the calculations made by Prof Hawking to understand if the new theory and solution made any sense.

Polchinski said: “I don’t think what Hawking and his collaborators are proposing is radical enough to solve the problem. But I haven’t seen the publication, so I’m just speculating.”

Prof Hawking’s article would be co written by physicists Malcolm Perry of the University of Cambridge and Andrew Strominger of Harvard.

Prof Hawking has even given the credit to Strominger who gave him the idea for this solution.

However, when Los Angeles Times reached Strominger, via telephone and when inquired about Prof Hawking’s new proposal, Strominger said: “Whatever the team publishes, it’s unlikely to be the final word.”

“There’s still much more work to be done to show that when something falls into a black hole that it leaves a record of exactly what it was. That is the part we still need to work out. Stephen is very optimistic that it’s all going to work perfectly. But physics is a hard mistress. You have to get all the calculations to work perfectly and everything has to line up.”

“Stephen is a smart guy,” Strominger continued. “Maybe he’s seeing all the way to the end. I’m certainly not.”