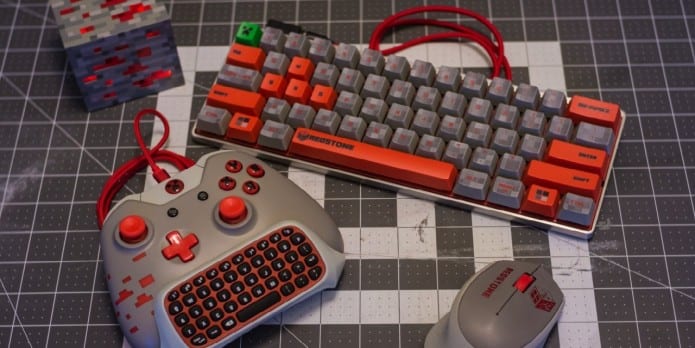 Spencer Kern, a video game designer has built a PC with a Minecraft theme by taking it to the next level to celebrate the game’s Windows 10 beta release, as well as the release of Windows 10.

Nicknamed as the Redstone PC, as the name of the project suggests, it resembles the block of redstone, one of the game’s fundamental Lego-like resources, found within the game along with complete red lighting on the inside. Spencer Kern, was so inspired by Minecraft that he even created peripherals such as its keyboard, Xbox One controller, mouse, and the accompanying chat pad to look like Minecraft as well.

“A keyboard and mouse are a no brainer for this type of build so I already kind of knew how to tackle those devices,” explained Kern. “However, since the Windows 10 edition of Minecraft also supports controller input I wanted to take this as an opportunity to make a custom Xbox One controller as well.”

He also said “This Redstone PC build was meant to be a celebration of not only the new Minecraft Windows 10 Edition Beta but also the launch of Windows 10 itself. I wanted to create a PC thats only purpose in life was to play Minecraft and look good doing it.”

“Just like the game, this entire build process was going to be an epic adventure,” he adds.

According to Kern, “The original inspiration for this build came from a little Redstone block light up toy. I started thinking about how small I could get a pc without starting from a SOC or prebuilt mini PC kit.”

Regrettably, Kern does not intend to sell his creation but the Microsoft artist provided enough details and photos for anyone with the desire and know-how to build one of their own. Just logon over to his website  where you can check out the process and maybe even come up with a design of your own.