Apple on late Wednesday has released an update to Boot Camp with support to Windows 10. Mac users can now officially run Windows 10 through an updated version of Apple’s Boot Camp dual-boot utility. All they need to do is download the latest official drivers and updates for Boot Camp 6 that will be required to run Windows 10 along Mac OS X on their Mac PCs and Notebooks.

The Apple support document provides the list of Macbooks and iMacs that support dual booting with Windows 10 via the release of Boot Camp version 6 and describes how to install Microsoft’s new OS for the dual-boot environment. 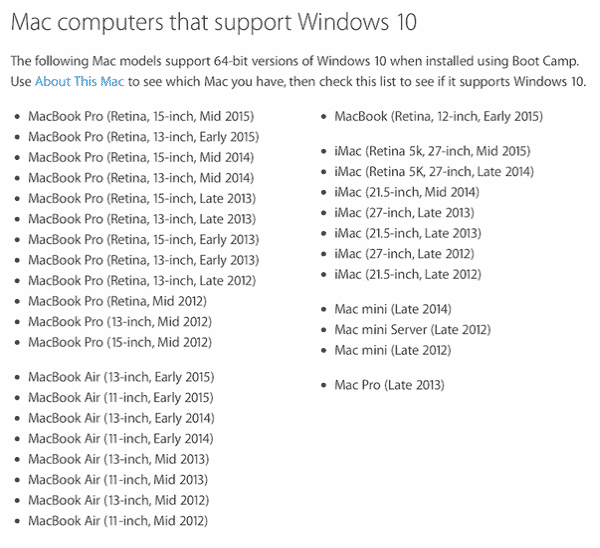 Boot Camp is designed for Mac users who do not wish to purchase a separate desktop or laptop computer and want to run Windows 10 on their Macbooks. Mac OS X and Windows can be run in two separate partitions on the same Mac through Boot Camp. You just need to simply choose the operating system that you wish to load each time your computer starts up.

On the positive side, Boot Camp is a good alternative for people who want to work with the same documents in OS X and Windows, as it allows you to share files between these two operating systems. On the flip side, Boot Camp can result in slow performance of your Mac.

The Boot Camp Assistant that allows you to run the set up utility is already built into Mac OS X. When you run the Boot Camp Assistant for the first time, it will automatically download the support software (drivers) needed to use Windows 10 on a Mac. Alternatively, you can check the Mac App Store for updates to see if there are any latest version 6 drivers available at this point, that is in the case if you are already running Boot Camp.

Windows 10 is  already capable of running on a Mac via the utility prior to Apple’s new Boot Camp support. Windows 10 support is only available on select Macs with OS X Yosemite or a higher version. You can find the full list of supported Macs on Apple’s new support document.

Boot Camp requires an authentic copy of Windows 10 for a new installation, which can be purchased from Microsoft in an ISO file or USB stick for $119. Windows 7/8/8.1 users can upgrade to Windows 10 for free from within their Windows partition, as long as the user’s software is completely up to date.

You can check out Apple’s Boot Camp Support page for more information on using Boot Camp.

Another method to run Windows 10 on Mac

Parallels Desktop for Mac and VMware Fusion for Mac are the two virtual machine applications that support the Mac. Available as an evaluation version with a free trial period of 14 days, Parallels Desktop 10 for Mac supports Windows 10 and is selling for $80. On the other hand, VMware Fusion 7 is also available and can be used as a trial version for 30 days. It is also compatible with Windows 10 and is selling at $63.