Every time Apple announces a launch, fans queue outside its stores to lay their hands on the latest Apple product. Each time before Apple unveils a new product or make announcements of upcoming gadgets, die hard fanatics who simply wants to be first in line also camp outside of an Apple Store.

Apple all set to reveal its latest iPhone today and it looks like someone has camped outside of an Apple Store in Australia. 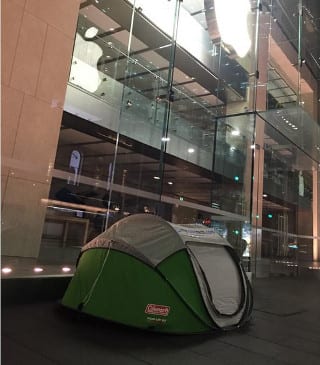 There may be a number of reasons why this person had decided to camp outside the Apple Store but one thing is certain. This particular Apple fanboy is going to have his 15 minutes of fame in tech forums and Reddit.

Who knows, he may also go down in history or a fact book as being the first person to camp for iPhone 6s.

Apple is unveiling its latest iteration of iPhone today and fans are hoping that it may also announce an ‘iPad Pro’, or perhaps even a revamped version of the Apple TV. It is quite possible that Apple may announce all three of them at the Bill Graham Civic Auditorium in San Francisco at 10 a.m PT.

You can watch the live stream which is available to Windows users for the first time in years through support for Edge, Microsoft’s new browser introduced with Windows 10.

But the question remains, would you camp outside a store for a product?