Kids these days know how to get their things done by their parents. Also, with most of them being technology freaks, this makes its even more easier for them to do so. That’s what Reddit user nasshole did with his parents.

With just a simple iPhone hack,  nasshole (real name Brendan, according to the extremely angry texts) pulled an astonishing prank on his parents and later posted the consequences online.

Well, the results were beautiful, when he asked them that if he could throw a party: 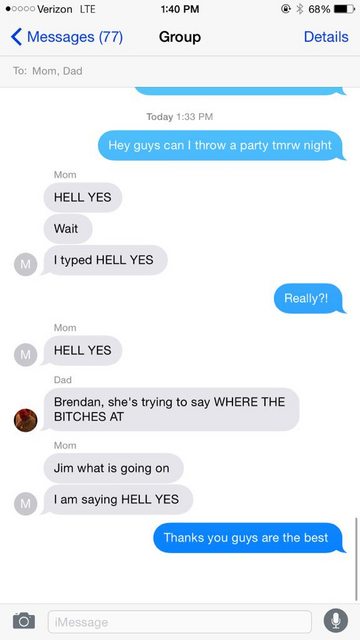 If you have to pick up a favorite part of the conversation, it would be definitely be where the dad is saying “Brendan, she’s trying to say WHERE THE BITCHES AT”.

This prank is so uncomplicated and yet so amazing. So, how about stealing your mom’s phone next time and sending message saying “Forget studies. It’s time to party hard tonight.”

You can upvote the ingenious bloke at Reddit or Imgur.