What would you do if you drop your mobile phone into an ocean? The only options available are is either you dive in the water and pick your phone, or say goodbye to your phone, or go ahead and buy a new phone. Or you could have a smart dolphin go and retrieve it for you.

However, during a recent visit to the Bahamas, Teressa Cee, a dancer for the Miami Heat professional basketball team had the last option available to her.

Late last month, Cee had posted a video on Facebook that was taken at Blue Lagoon Island, a place that allows people to hang out with dolphins and sea lions. 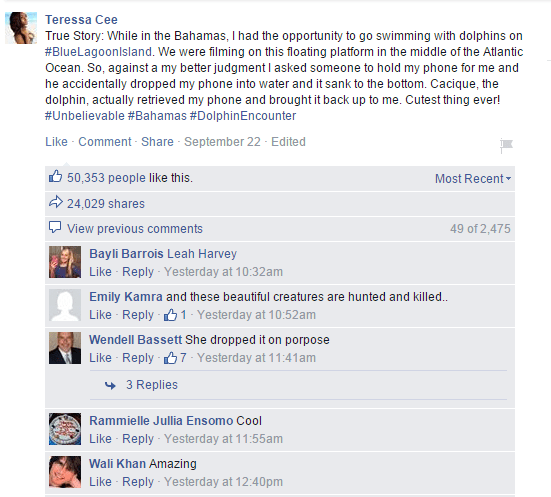 Setting the scene, Cee says: “We were filming on this floating platform in the middle of the Atlantic Ocean. So, against my better judgment I asked someone to hold my phone for me and he accidentally dropped my phone into the water and it sank to the bottom.”

Seeing the phone fall in the water, a dolphin named Cacique politely went down to get it and got it back with a high-pitched cry on delivery. The good-Samaritan dolphin is shown in action in Cee’s video. It’s lucky for Cee that the dolphins have not yet left for their home planet.

This is not the first instance that marine-related life have twisted together with technology. Back in 2012, a greedy seagull made an appearance only to leave hurriedly with a GoPro. Similarly, a penguin-egg-eating Striated Caracara bird flew away with a disguised camera that was owned by some BBC documentarians and unintentionally in the process became an aerial photographer. However, in this case, the dolphin Cacique was generous enough to return the phone to the owner.