Here is how you can secure your invite for Project Fi right now?

If you are tired of using your current carrier then Google has the next best alternative for you in the form of Project Fi. In order to create its presence rapidly, Google is handing out free ‘instant’ invites for its Project Fi wireless network. The service made its debut in April, and for those who do not know about this, the service does not require a contract and nor does it require you to pay an additional amount when you want to terminate your connection.

In a way, it is Google’s way of saying that it plans on delivering wireless connectivity far better than other U.S. carriers. Furthermore, one primary advantage of using Project Fi will be that it will refund unused data, which is something that the company’s newly formed competitors do not even entertain. Google’s Project Fi intelligently figures out if you are moving around or are located in one place. Based on that, Project Fi will connect you to the nearest and fastest wireless network, which can range from an open Wi-Fi hotspot, or a partner’s LTE network.

This will provide the best connectivity performance and reduce interference. Currently, Sprint and T-Mobile have ended up partnering with Google to launch Project Fi. If you ever needed to learn more about Google’s newly released service, you can do so at any time by visiting this link. The only drawback to using this service is that you will require a compatible smartphone to work. Seeing as how this is the opportune moment to market its Nexus smartphones effectively, the only compatible devices right now are Nexus 5X and Nexus 6P. 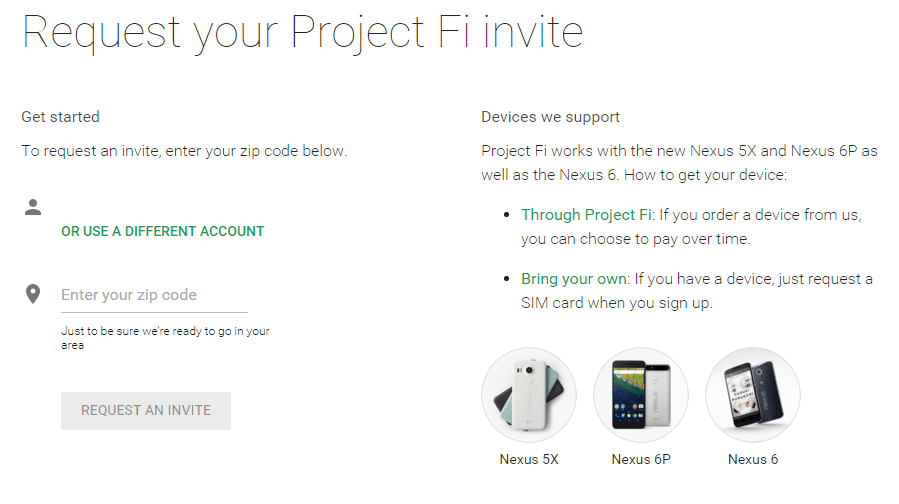 In order to sign up for the service, you will need to visit the Project Fi website and request for an invite. After this, Google will ‘instantly’ let you sign up for the wireless network service. The price of Project Fi starts at $20 per month and you will receive the basic package which comprises up of the following:
• Talk
• Text
• Wi-Fi tethering
• International coverage in more than 120 countries

If you are interested in testing out the service, you are going to have to hurry because the offer is going to expire in 24 hours.