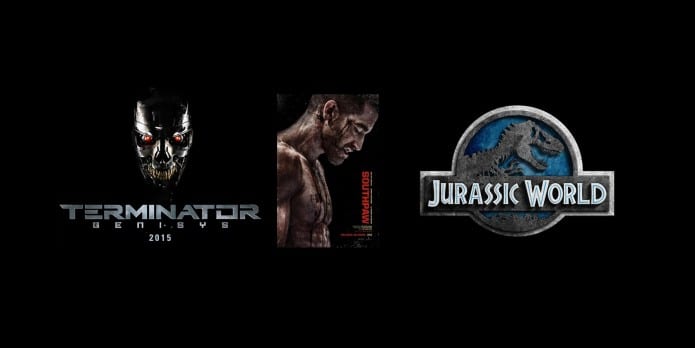 Like every week, BitTorrent again provides the list of the top 10 most downloaded movies for the week ended 10th Oct. 2015. Topping the chart this week is Antoine Fuqua’s ‘Southpaw’, which is followed by ‘Jurassic World’, and ‘Terminator Genisys.’ The top 10 movies in the chart this week also have four newcomers.

The data for the weekly download on BitTorrent chart is estimated by TorrentFreak, and is for informational and educational reference only.

Southpaw is a sports drama film directed by Antoine Fuqua and written by Kurt Sutter. The film stars Jake Gyllenhaal, Forest Whitaker, and Rachel McAdams. The film was released on July 24, 2015, by The Weinstein Company.

The film is about boxer Billy Hope turning to trainer Tick Willis to help him get his life back on track after losing his wife in a tragic accident and his daughter to child protection services.

Jurassic World is an American science fiction adventure film, the fourth installment of the Jurassic Park series. It was directed and co-written by Colin Trevorrow, produced by Frank Marshall and Patrick Crowley, and stars Chris Pratt and Bryce Dallas Howard. The film was released by Universal Pictures on June 12, 2015.

This film is based on a new theme park is built on the original site of Jurassic Park. Everything is going well until the park’s newest attraction–a genetically modified giant stealth killing machine–escapes containment and goes on a killing spree.

Terminator Genisys is an American science fiction action film, directed by Alan Taylor and written by Laeta Kalogridis and Patrick Lussier. The fifth installment in the Terminator franchise, the film stars Arnold Schwarzenegger, reprising his role as the eponymous character, along with Jason Clarke, Emilia Clarke, and Jai Courtney. The film was released on July 1, 2015 by Paramount Pictures.

Story: When John Connor, leader of the human resistance, sends Sgt. Kyle Reese back to 1984 to protect Sarah Connor and safeguard the future, an unexpected turn of events creates a fractured timeline.

Story: When aliens misinterpret video feeds of classic arcade games as a declaration of war, they attack the Earth in the form of the video games.

Paper Towns is an American mystery comedy-drama film, directed by Jake Schreier, and based on the 2008 novel of the same name by John Green. The film was adapted to screen by Scott Neustadter and Michael H. Weber, the same team that wrote the first film adaption of one of Green’s novels, The Fault in Our Stars. The film stars Nat Wolff and Cara Delevingne and was released on July 24, 2015 in the United States by 20th Century Fox.

Story: After all night adventure, Quentin’s life-long crush, Margo, disappears, leaving behind clues that Quentin and his friends follow on the journey of a lifetime.

Tomorrowland (also known as Tomorrowland: A World Beyond in some regions) is an American science-fiction mystery adventure film directed by Brad Bird, and co-written and produced by Bird and Damon Lindelof. The film stars George Clooney, Hugh Laurie, Britt Robertson, and Raffey Cassidy. The film was released on May 22, 2015 by Walt Disney Pictures.

Story: Bound by a shared destiny, a teen bursting with scientific curiosity and a former boy-genius inventor embark on a mission to unearth the secrets of a place somewhere in time and space that exists in their collective memory.

Story: When a devoted husband and father is left home alone for the weekend, two stranded young women unexpectedly knock on his door for help. What starts out as a kind gesture results in a dangerous seduction and a deadly game of cat and mouse.

Story: In the aftermath of a massive earthquake in California, a rescue-chopper pilot makes a dangerous journey with his ex-wife across the state in order to rescue his daughter.

Avengers: Age of Ultron is an American superhero film based on the Marvel Comics superhero team the Avengers and was produced by Marvel Studios. It is the sequel to 2012’s The Avengers and the eleventh installment in the Marvel Cinematic Universe (MCU). The film was written and directed by Joss Whedon and features an ensemble cast that includes Robert Downey Jr., Chris Hemsworth, Mark Ruffalo, Chris Evans and Scarlett Johansson. The film was released on May 1, 2015 and distributed by Walt Disney Studios Motion Pictures.