Only Nexus, LG and Motorola made Android smartphones cut the grade for security in Cambridge University study

According to a study by a group of researchers from Cambridge University only Nexus, LG, HTC and Motorola manufactured Android smartphones can truly be marked as secure. The study which encompasses almost all Android smartphones found that 87% of Android devices are vulnerable to attack by malicious apps and messages. 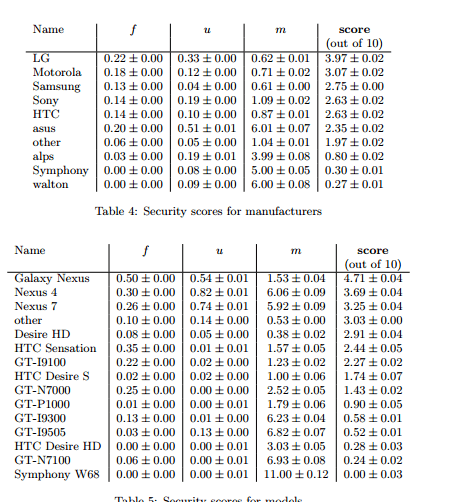 According to the study’s results the blame squarely lies on the smartphone manufacturers because most do not provide regular security updates. The researchers said that the onus for the delivery of updates in the Android ecosystem lies with them rather than Google, operators or users.

“This arises in part because the market for Android security today is like the market for lemons: there is information asymmetry between the manufacturer, who knows whether the device is currently secure and will receive updates, and the consumer, who does not,” the researchers pointed out. “Consequently there is little incentive for manufacturers to provide updates.”

They found that devices built by LG and Motorola, as well as those devices shipped under the Google Nexus brand are much more secure than others.

“Google has done a good job at mitigating many of the risks and we recommend users only install apps from Google’s Play Store since it performs additional safety checks on apps,” Dr. Alastair Beresford noted. “Unfortunately Google can only do so much, and recent Android security problems have shown that this is not enough to protect users. Phones require updates from manufacturers, and the majority of devices aren’t getting them.”

The researchers’ hope is that this study will help people when choosing a phone, i.e. that they will opt for devices made by those manufacturers who are more quick to update them. Conversely, they hope that the study will spur manufacturers and operators to deliver updates in a timely manner.