Mac users having tough time for their productivity as Microsoft Office 2016 is highly unstable on the new OS X EI Capitan and keeps on crashing randomly.

Just after Apple released its new OS on Sept 30, the support and discussion forums of Microsoft were flooded by complaints of Office 2016 being unstable and crashing regularly.

“This is beyond the Pale. We basically can’t use Office on our computers,”

Wrote Watson Scott Swail on a long thread related to the crash problem.
The discussion thread where Swail posted his complaint had over 140 messages and had been viewed more than 13300 times, both extremely large numbers for this forum. 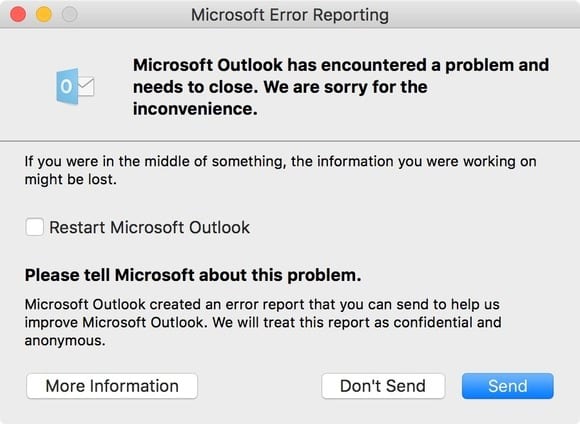 The thread’s kick off message was posted about two weeks after Microsoft shipped Office 2016 for Mac and Apple delivered the first public beta of OS X 10.11, aka El Capitan, the volume of messages added to the thread swelled when Apple released the update for its OS.

The application crashed repeatedly and the ensuing lockups came while performing different chores with the application. Some users have seen Outlook going dead after they start their mac from sleep,some noted that downfall in one app resulted in crashing all of the apps open at the moment while some noticed that even after crashing the apps did not close by self leaving user with no other option than to perform a restart to get things going again.

“If I have more than one Office app open and a crash occurs on one of them, the other one locks up too,” wrote a user identified as “EJZK”. “But only the Office apps. Other apps continue to work fine.”

Like a typical peer to peer support forum,soon after the course of complaints,theories and prompt solutions regarding crash were posted by some users,but the problem remained the same.But one agreement was common among them that this situation is unacceptable and needs to be solved as soon as possible.

“This issue has been happening on [OS X 10.11] beta for months. And it appears that Microsoft still isn’t doing anything about it,” said Swail in a later post. “As someone else reported, they know about this but do not appear to be doing much about it. It is not an Apple issue. It is a [Microsoft] issue. All my other programs are fine, including the entire Adobe suite, which I think is infinitely more complex than Office.”

“Any sane developer should be proactively ensuring compatibility with GM [golden master] prior to release,” added “fryle” today. “That’s kind of the point of GM. Otherwise you get what we’re seeing now: customers upgrading to El Cap and finding Office, a mission-critical suite for most people, is now broken. At worst, Microsoft hasn’t taken this seriously enough, and at best, it hasn’t been communicating with its customers well enough. There has been no advisory (to my knowledge) warning of the known issues and certainly no ETA on a fix. It’s disappointing, to say the least.”

It is still not clear whether the problem is due to Microsoft’s code error or Apple’s, or due to that of both, this issue has been present on Golden Master (a term used for last testing version of an upcoming program or operating system) and official release of EI Capitan. Even an update for Office later provided by Microsoft did not help.

Surprisingly,Microsoft did not immediately reply to a request for comment and whether it had a fix in the works.

But someone identified as Sunder Raman — who said he was a program manager on the Mac Office team — left several comments on a story about the crashes published on Thurrott.com. There is a “Sunder Raman” listed on Linkedin.com, who has a title of senior program manager for Outlook on Mac.

“We have been working with Apple through the Beta period and have collectively resolved several issues,” Raman said as he responded to criticism that Microsoft dallied during OS X 10.11’s three-plus months of developer previews. “Some issues are hard to isolate given the nature of hardware configuration differences like graphics cards, number and type of accounts used, etc.”

Microsoft has acknowledged a different issue with Outlook 2011, the predecessor to the email client bundled with Office 2016, on El Capitan. In a support document, Microsoft said it was “researching the problem,” which caused Outlook 2011 to crash when trying to sync with an email server.

Office 2016 for Mac sells for either $150 or $230 in perpetual license form, or is available with an Office 365 subscription, which range in price from $70 to $240 annually for the entry-level consumer plan and the most expensive corporate deal, respectively.