RoboHon is an eight-inch-high (at 19.5 cm tall) robot and weighs 390 grams. It comes with a 2-inch (320 x 240) screen on the back and a camera and projector built into its face. It walks, talks, dances, and connects to Wi-Fi and LTE. RoboHon has built-in cameras that is capable of recognizing people by their face or voice, and will act accordingly, telling them to smile for the camera or they have a new message. It is basically the visible form of the idea that your phone is your best friend. 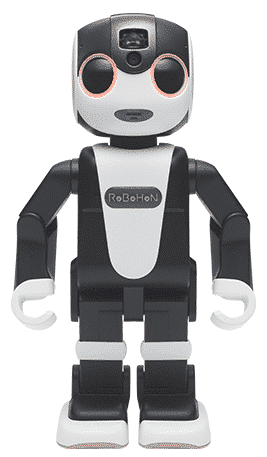 When RoboHon (that’s a Japanese katakana-ized contraction of robot phone) wants to tell you something, it can walk, sit down, get back up, dance, and raise its arms. It can be your memo taker, your talkative alarm clock, and text message reader and do all sorts of Siri things with a reduced level of creepiness.

While there is no news on the pricing on RoboHon, Sharp says it will release the robot in the first half of 2016 and will be available only to Japanese citizens. Watch the video below to decide if you would buy the future Japanese anime.