Some of the patches released by Microsoft in the last couple of years have not worked exactly properly, while others have been allegedly spying on you. In order to keep the computers in fully working condition, many people had to remove and even hide a number of updates as they were left with no other option.

Well, now, thanks to this free app that gives you full control of every Windows Update without you having to browse through multiple locations on your computer.

Just how one would generally do with the Windows Update tool that’s integrated into the operating system, the app called Windows Update MiniTool brings devoted choices to check for updates, download and install them.

However, the program simultaneously also provided the options to delete installed updates and hide unwanted items, which becomes useful when the same patch is being re-offered although it’s creating problems on your computer. 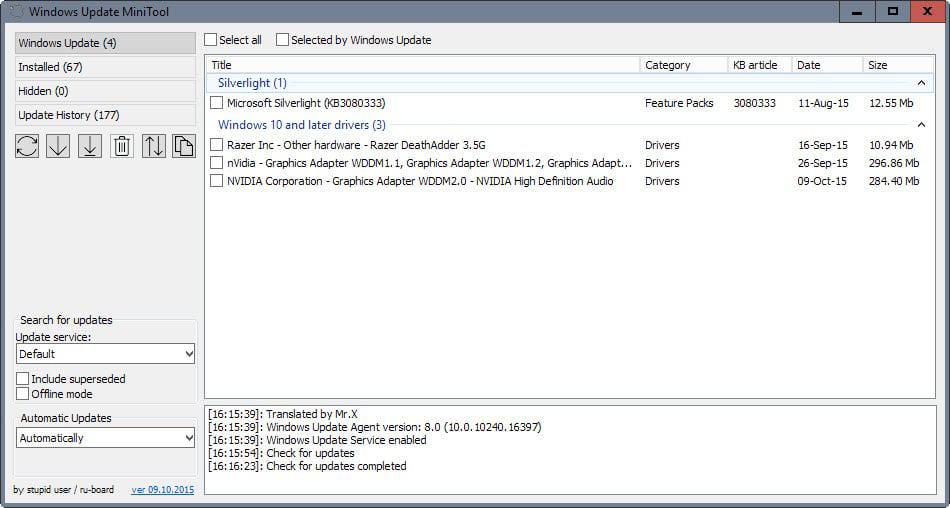 In addition, it also comprises of a number of other helpful features to get direct links to the *.cab / *.exe / *.psf update files, which lets each patch to be installed manually, but also to check update history and figure out with ease which bulletin might be creating issues on a PC.

For users running the apps, there are several modes available such as: auto – selected updates are downloaded and installed automatically, disabled – updates are verified but not downloaded, notification mode for letting you know when new updates are available, just download – everything is downloaded but not installed, and scheduled, which installs updates at a user-defined time.

Almost every version of Windows on the market, which includes the new Windows 10, supports the working of the new tool. So, one can safely download Windows Update MiniTool now to see what’s in store. It is also a good practice to keep a backup handy, in case if you feel that it may affect your PC.

You can download Windows Update MiniTool from the cloud services mentioned here.

Adobe Is Bringing Photoshop, Illustrator To The Web

The “Squid Game” App Is Infecting Devices With Malware