Google has released a new App called Who’s Down which lets you broadcast to your friends about when you will be available. The new social media tool is a all-purpose “available” button. Slide the toggle from on to off, and anyone you’ve connected with can tell that you’re available for your friends. The App lets you select specific activities you’d like to take part in, see which friends are also “down,” and chat with them in an integrated message service.

The App is still in beta and Google is allowing users to download it on invite only basis. The sign in process is simple but one odd thing about Who’s Down is Google also asks for a school name when requesting an invitation. This would suggest that Google has developed the App with college students in mind. 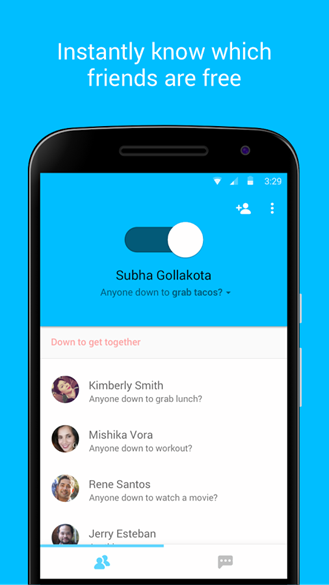 It is surprising why Google has built the Who’s Down as a standalone App when the features in this App are more suited to be integrated with Google Maps or Google+.  Maybe it wants to integrate all social media and messaging Apps into a single broadcast App.

The app, which was first spotted by 9to5 Google, is available for iOS and Android. “We’re not down to share more details just yet, but check out this page for more info in the meantime,” the company told us in an email.